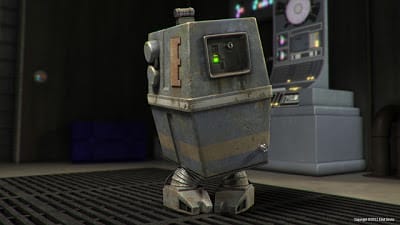 Comic Con 2011 was a veritable moving feast of delightful nerdery – from new toys an merch unveilings to those over-subscribed panels and sneak peeks at upcoming films and games. And in amongst the cosplay devotees and the casual dorks alike, the winner of the Star Wars Fan Movie Awards’ prestigious George Lucas Selects Award was chosen and congratulated by a host of nerdy on-lookers.

This year’s winner of the award, presented by Lucasfilm and Atom, was Los Angeles-based filmmaker Eliot Sirota for his film, Star Wars: Unlimited Power. The film isn’t your usual fan-made fare in that it doesn’t seek to tell a story of a different part of the Star Wars universe to those shown in both trilogies, preferring instead to take the fake marketing approach that serves many fan poster-makers so well.

And it was a deserved winner in my book:
The film-maker spoke to The Official Star Wars Blog in the wake of his victory, confirming that he was inspired to tell the story of an inanimate object from the Star Wars universe that is otherwise accepted as mundane in the context of the story – giving something traditionally relegated to the side-lines a brief shot at the lime-light. He talks of his motivation in this re-posted response to the question of his motivation and inspirations:

Star Wars is what started me on my career path. From the moment I saw it at the tender young age of 5, I knew I wanted to tell stories, create special FX and make movies. So I suppose that’s one of many ways that George Lucas has influenced me! If I were to list all of them, I would have to write a book! The short and sweet version is that he made something no one else had imagined possible at the time and pioneered a whole new way of making movies, television and media. He saw that art and technology were two sides of the same coin and could be used together to create something that transcended both of them. Without “Uncle” George leading the way, many other great movies would never have been possible.

As far as what prompted me to a make a Star Wars film, the original trilogy films are still my all time favorite movies, and what Star Wars fan wouldn’t want to play in and expand on that world? I think I always wanted to make a Star Wars fan film, and maybe even someday have a hand in an actual Lucasfilm Star Wars project!

A fitting win for a true talent.
You can read the full interview with Eliot here.