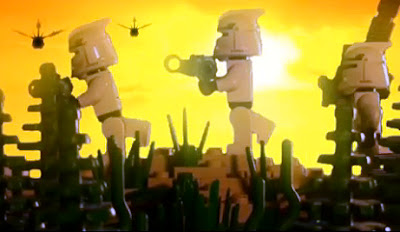 I can’t resist sharing these Star Wars Fan Movie Awards winners, so I won’t. This latest addition to the winner’s gallery is that which walked away with the Spirit of Fandom Award, and was made by Caribbean-based filmmaker James Austen. The Tentacle Trap tells the tale of a small band of Clone pirates who are captured by a foe far worse than Darth Vader while on a treasure-hunting trip to a leafy planet.

Anyway, here it is…
Austen spoke to the Official Star Wars blog about the specific difficulties presented by working with stop-motion and Lego:

Remembering not to be a clumsy oaf was the biggest challenge to overcome! Halfway through a scene I’d often knock the camera or the set and have to start all over again. I lost hours making that mistake. And surprised with the software that is now available, and the help, advice and resources online. This was the first time I’d really played with visual effects, and after the challenge of working out how to break down a scene so that what was on the screen would resemble what was in my head, as a total novice I was really pleased and surprised at the results. As a kid, I’d never have imagined that one day on my dining room table I could churn out my own film full of whizzes and bangs and flashes. I shudder at the thought of the number of hours put into it, but I loved every moment of making it.

The animation – achieved using Animator DV, FX Home and Propellerhead Reason is of a phenomenally high standard, especially when stood next to other fan-made films that use lego as their story-telling medium, and Austen deserves huge recognition for what he has achieved. Not only that the story-telling itself is wonderful, with little charismatic touches making the difference and seriously ramping up the charm.
And the skill doesn’t stop there – Austen’s composition is nothing sort of cinematic, and he clearly has a good eye for scene-building. Personally I can see him going far, though he does proclaim that the film was more a labour of love than an attempt to start a career in film-making.
The clever film-maker even ends his interview with the Star Wars Blog by suggesting that George Lucas should make an Episode 0, with Yoda as a young Jedi, which I think you’ll agree is a bloody marvellous idea for the next step in the franchise.
If you want to watch more of James Austen’s films, and you bloody well should, visit his youtube page. Oh and leave him some nice comments as well. Share the love, and all that.