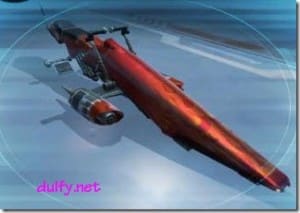 1.2 is coming and there will be some big changes and additions to the game- as we know already. In addition to the incoming Legacy system, new customizable UI and new warzone, Flashpoint and Operation, we will also see new daily missions, upgrades to crafting and more.

However, there are also going to be some things retired. Here’s what you can say goodbye to after 1.2 and if you have them already, then you can hold onto them as trophies to prove how long you’ve been around the game.

Georg Zoeller: There will be no way to obtain white color crystals in Game Update 1.2 or any of the 1.2 series of patches. As for further into the future, it is fair to say that we have not yet made up our minds.

Say goodbye to those giant speeders that block NPCs and mailboxes. BioWare is going for a sleeker, sexier style for 1.2.

Georg Zoeller: Korrealis Corporation, a family-owned personal transportation company based out of Balmorra, has announced that, in response to a sharp increase in customer complaints, all production of the ‘Sovereign’, ‘Prince’, ‘Baron’ and ‘Commander’ speeder lines has been halted indefinitely. This announcement comes on the heels of the rumor that Tirsa Industrial Consortium has quietly ceased production of their less than successful ‘Prime’ model, which faced similar blowback.

Vehicle Vendors across the galaxy have been advised to clear out any remaining stock of these models, and many Vendors have begun offering steep discounts to entice potential customers. Collectors and investors may want to take note that the previous limitations governing the resale of some vehicles seem to have been lifted and are encouraged to use the opportunity to purchase these legacy vehicles while they are still available.

So there you have it, my friends. All of large speeders are being removed but if you already have one, you get to keep it.

David Hunt: While the Champion gear vendor has been replaced with the Recruit gear vendor, they are two separate item sets. You can no longer acquire Centurion or Champion gear, but they are still in the game if you already have them. Recruit gear is a new set of blue PvP gear. It has no mods and is purchased with credits. Champion is fully moddable purple gear with a set bonus.

There are some of the big changes and removals. What do you think about 1.2? Are you ready? What are you going to do for 8 hours while the servers are down?