If it’s been awhile since you logged into SWTOR then you probably have seen one of the creative emails they send asking you to come bad. CAD Comic had a little something to say about that very topic today. In addition to a hilarious cartoon, they also bring up a very important point about the game- why so many players left after 50. 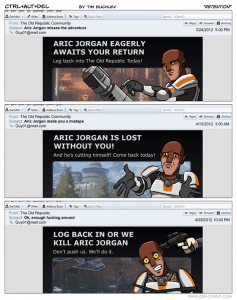 I applaud the extra mile they went to tug at my heartstrings, but if they’d put as much effort into SWTOR’s endgame they wouldn’t need to be sending me this email in the first place. Don’t get me wrong… Level 1-50 is absolutely the most fun I’ve ever had leveling up in an MMO. Bioware set the bar pretty high for questing and leveling in that regard, and I’m spoiled for every other MMO.

Unfortunately all of that enjoyment hit a brick wall once I got to level fifty and the storyline ended. PVP was fun for a little while, but it was bogged down by an arbitrarily obtuse reward system that still makes no sense to me. PVP to get points, which you then use to buy two types of other points, then use those two types of points to buy a chest, which gives you another kind of points that you trade in for items.

This is exactly the problem that many are facing. Even members of my guild are complaining of the same thing, many of them having cancelled their subscriptions for now. Some say they will come back when BioWare adds more to the game as promised but for some, it’s already too little too late.

What do you think? Is the end game a problem for you? Are you waiting around for something better or have you given up on end game SWTOR?