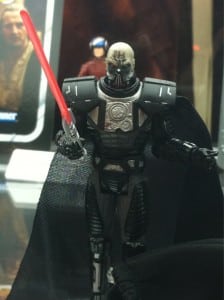 While many fans of SWTOR are anticipating the upcoming changes to the storyline that allow for some same-sex relationship arcs, there are others who are not so pleased with the decision BioWare has made to add these options to the game.

Florida Family says, “Will the makers of Star Wars video games create Darth VaPaula, a (mock) transgender version of Darth Vader – RuPaul, for kids to choose as their action player?”

That title alone is offensive and does not show the tolerance that this same organization often preaches about. However, this is just the beginning of the ignorance and bigotry in this article. While I fully respect everyone’s opinion and right to those opinions, Florida Family are trying to petition and encourage others to boycott and petition something they know nothing about, based on what they presume to understand.

I take many issues with their article and their complaints. First, they cannot even get the name of the game right. My second issue is that they claim it is being marketed to children, which is not true. SWTOR is rated T for Teen and there have been reports of bannings for anyone who claims to be under the age of 13 playing the game. BioWare is taking a strict stance on this game not being for those under the age of 13.

LGBT (lesbian, gay, bi-sexual, transgender) extremists pressure Star Wars video game maker to commit to add LGBT content and censor critics. An overwhelming percentage of the 1.7 million games sold are being used by children who do not need to be introduced to this propaganda. Please send your email to BioWare’s parent company Electronic Arts.

Their statistics are clearly made up. There are very few, if any, children playing SWTOR and if there are, they are doing so on their parent’s accounts, presumably with permission. Speaking as a parent, don’t let your children play adult games if you worry about what they might be exposed to in such games.

Secondly, there are no “LGBT extremists” pressuring BioWare to do anything and even if there were, BioWare/EA would not change the game in such a way unless they see that they can do it without harming the realism and story of the game. They also want to see that there is a clear benefit to offering such things. Many of the people who want same-sex options in SWTOR are not LGBT in real life and many who are LGBT in real life, play heterosexual relationships and characters in the game. That is the point of an MMORPG- fantasy. It’s about role-playing… pretend… imagination. Playing a character in a game doesn’t make you gay any more than standing in line behind a gay person at the grocery store.

But Florida Family wants you to believe differently and that exposure to this in the game will create harm not only to those who choose some same-sex relationship arcs but even to anyone else playing the game. (ie. I cannot group with someone who has a homosexual relationship with their companion because it might rub off on me?)

Once again, they show their ignorance of the game. “Forced to deal” with it how? You don’t have to follow another player’s personal storyline. You don’t even need to know who they have sexual relationships with in game and who they do not. In fact, when you are playing with other gamers, you’re not even going to know this information unless they tell you. And if they do and it upsets you, there is always the option to ignore the player so you never have to group with them or be “bothered” by them again.

But what more could you expect from an organization that keeps calling player characters “action figures”?

“So if BioWare, the maker of Star Wars video games, adds LGBT characters for kids to select as their action figure it could be something like Darth RuPaula, a combination of Darth Vader, one of the most popular Star Wars characters, and RuPaul, the renown transgender cross dresser.”

That quote taken from Florida Family is not only ignorant; it’s inaccurate, offensive and obnoxious. How can any semi-intelligent person take their claims seriously when they:

They are asking people to write Stephen Reid with complaints about the game. They made sure to get his name and contact right even though not a single other thing they have posted made any sense whatsoever.

This isn’t even an issue of whether or not you support homosexuality. This is the dumb leading the dumb. I’m reminded of that episode of Tyra where she broke the dude’s World of Warcraft CDs because his wife thought he was playing too much (dear Tyra, you don’t need the discs to play) except this is even worse.

Florida Family needs to take a little more time learning about what it is they are protesting if they ever want to be taken seriously about their complaints.