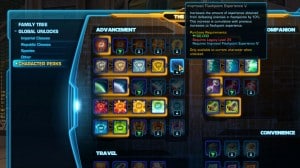 Hi, I’m Senior Game Designer William Wallace. In Game Update 1.2, we introduced Legacy Unlocks, a system in which characters across your Legacy could unlock special rewards for reaching different milestones. Since Game Update 1.2 went live, your Smuggler may have learned a new skill from their Sith Inquisitor father, or you might have unlocked new species options for your classes. No matter your personal choices, you have now started to build your very own Star Wars™ legacy.

With Game Update 1.3, we are continuing to expand the Legacy system by introducing the new Character Perks system. Character Perks allow you to customize each character in your Legacy, allowing you to modify how you level them with modifiers to increase the experience you gain from Flashpoints or Space Missions. Character Perks will also grant your Legacy character new conveniences that are useful both during leveling and once you’ve reached level 50.

Let’s take a look at the types of Perks we’re adding for Game Update 1.3! 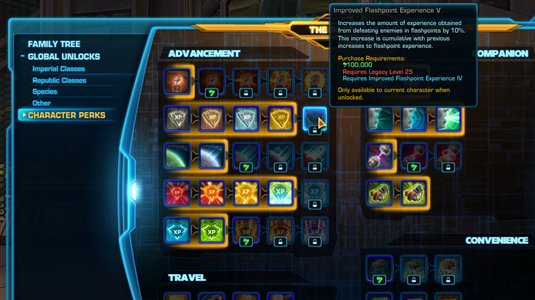 There are five categories of modification perks in 1.3:

Our goal with experience modifier perks is to make it easier for you to level up new members of your Legacy by focusing on the parts of the game you enjoy most. Just want to focus on the story? Buy up all of the Class Mission modifiers, and you’ll receive a significant bonus to the experience you receive from doing them. Figure you’ll be traveling a lot while you do that? Pick up the Exploration modifiers, so that every time you uncover a new part of the map you get a little extra experience.

The Travel Perks introduced with Game Update 1.3 will help new and old characters alike get around the galaxy a little easier.

Your more seasoned characters will also be offered new Priority Transport abilities. These abilities work like our existing Emergency Fleet Pass, whisking you off to your destination immediately. One new ability takes you directly to your Fleet Vanguard Vessels (the Gav Daragon or Ziost Shadow), and shares a cooldown with your normal fleet pass. Three others take you to your character’s Capital World (Coruscant or Dromund Kaas), the Outlaw’s Den on Tatooine, or the Black Hole on Corellia.

Companion Perks modify the way that you interact with your companions, as well as making them more useful to you at both low and high levels. 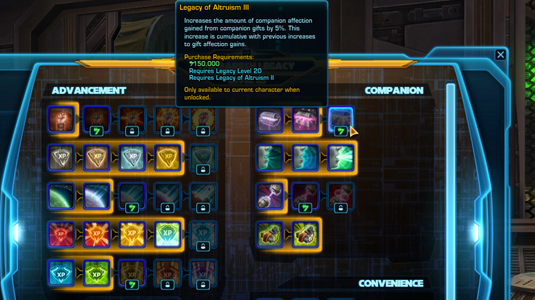 You can purchase perks that modify the rate that you gain affection with your companions, both from giving them gifts and from the choices you make during conversations. These perks will make it considerably easier to reach your Companion’s Global Unlocks, or to allow you to get on your companion’s good side if you have spent a lot of time mistreating them. There is also a set of perks that increases the chance that your companions will achieve a critical success when using crafting skills, and you can even modify the length of time that they are gone selling your trash items, so that they’re only gone a quick few seconds instead of waiting around a full minute for them to return.

Tired of being caught out in battle with damaged gear? Didn’t bring the medpacs you thought you had? Try the Field Repair Droid perk. At the lowest level of the perk, this Convenience Perk summons a Droid that will repair your damaged gear. At the second rank of the perk, the Droid carries a full range of adrenals and medpacs. At the third and final rank, the Droid also acts as a full-service Crew Skills material vendor, carrying all of the Thermoplast Flux, Fibrous Nylite Solutions and Brocart Filaments that you need. The Field Repair Droid also acts as a vendor at all levels, so you and your allies can unload unwanted gear while on the go.

What if you’re handling important auctions on the Galactic Trade Network and need to access your mail? Another Convenience Perk will let you summon a mail Droid assistant with the Field Mail Droid perk. The Droid assistant acts as a mailbox wherever you need one. 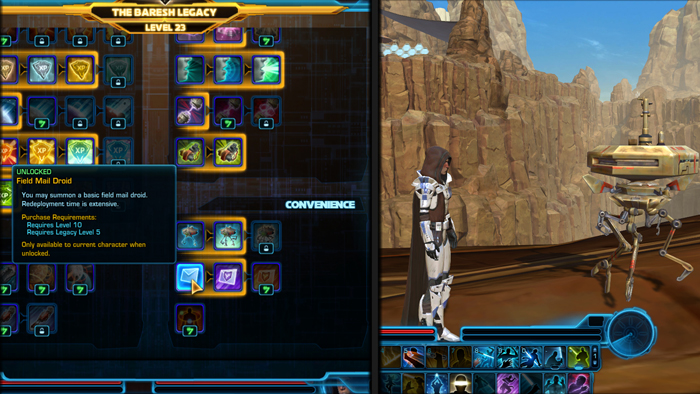 Finally, we also offer a perk which allows you to reset your skill trees from anywhere in the game. The Field Respecialization perk adds a new button to your skill tree window that enables this feature. Re-specializing in the field costs the same as it would if you did it in a city, and continues to increase in cost the same that it does normally. It functions identically to the current system, except that you can access it from anywhere once you have this perk.

The Legacy system will continue to improve and expand beyond Game Update 1.3. Our team is constantly looking at new ways of enhancing the experience for all of your Legacy characters, as well as providing new conveniences and fun little perks for everyone in your family tree. As always, we want to hear your feedback so jump on the Public Test Server and let us know what you think!