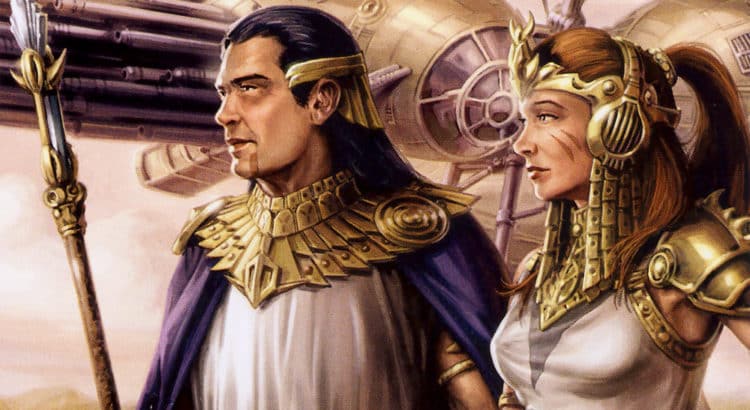 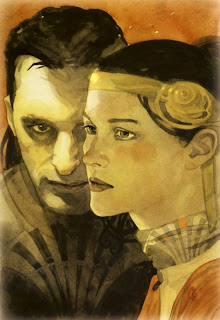 In the latest Friday update BioWare interweaves the known lore of this first war between the Sith and the Republic and relates it to the events of Star Wars: The old Republic. We have already talked about Naga Sadow and Ludo Kressh in earlier Know your lore articles. But two new names we haven’t talked about yet came up. The two hyperspace explorers Gav and Jori Daragon. So here we go.

Biography
As children living on Koros Major, Gav and his sister Jori were chosen for Jedi training, but they refused, choosing instead to continue working as hyperspace navigators with their parents Hok and Timar. Hok and Timar, their children only twenty years old, were killed while delivering supplies to Empress Teta’s soldiers on Kirrek to assist in the battle there. At this time, one of the Daragon family’s two ships, the Starbreaker 12, was being held at Aarrba the Hutt’s repair dock as collateral. He gave it to Gav and Jori after learning of their parents’ deaths at Kirrek, saying they “paid for it in blood.”

Gav and Jori survived their parents’ legacy, mapping out several new hyperlanes. While flying through the Starswarm Cluster, the Starbreaker 12 was greatly damaged, forcing them to impound it Aarrba’s repair dock. With no credits to speak of, and nothing else to barter with, the Daragons were unable to claim the Starbreaker 12 when Aarrba finished repairing it.

The Daragon Trail
Gav and Jori soon found themselves with a price on their heads, put on by Merchant Lord Ssk Kahorr after one of his drone ships crashed into Primus Goluud while using the Goluud Corridor, one of the Daragons’ hyperspace routes. After narrowly escaping a pair of bounty hunters with the help of Odan-Urr and Memit Nadill, Gav and Jori stole back the impounded Starbreaker 12 and, pursued by Cinnagar security forces, punched in random coordinates, sending them to Korriban, the cemetery of the Sith Empire (this route would later become know as the Daragon Trail).

After arriving in the Horuset system, Gav and Jori were immediately taken prisoner, as the Sith wildly debated over what to do with them. They were locked in the icy, underground prison in the Sith Fortress on Ziost, where the Daragons soon learned from the Sith Lord Simus that they were to be executed as soon as possible. However, in the first step of his elaborate plan to become Dark Lord, Naga Sadow and his loyal group of Massassi attacked the Ziost prison, freeing Gav and Jori, and making it look like an attack that was orchestrated and carried out by the Republic. Gav and Jori were sent to Sadow’s private fortress on Khar Shian, as Naga Sadow was successfully crowned Dark Lord of the Sith, promising to defend the Sith against the Republic. Gav, kept in a separate room from Jori, waited on Khar Shian for days, scarcely seeing Sadow at all. Throughout this time, he was taught ancient Sith magic by the Dark Lord, slowly converting him to the dark side. 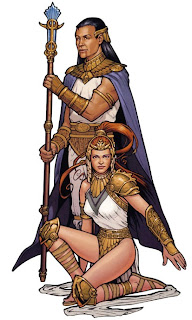 The Great Hyperspace War
When Naga Sadow was ready to commence his assault on the Republic, he appointed Gav as Commander of the Koros Major invasion. When they arrived at Koros Major, Gav flew down to the surface to look for his sister, who had since escaped in the Starbreaker 12, flanked by a group of Massassi bodyguards. As the battle raged in space and on the ground, he entered Aarrba the Hutt’s repair dock. Upon sight of him, the Massassi plunged their spears into Aarrba, apparently seeing him as a threat. Jori entered at that very moment, and attacked Gav with a lightsaber given to her by Odan-Urr, but Gav was able to escape and flee to Primus Goluud, where Naga Sadow’s meditation sphere was located.

Gav fired on the sphere, breaking Sadow’s concentration, and giving the Republic soldiers the advantage in the Battle of Coruscant. Sadow lured Gav onto his meditation sphere to discuss his actions, and Gav foolishly did so, quickly discovering that Sadow had vacated the sphere. Just then a fleet of Koros ships appeared, along with Jori, who had followed Gav to Primus Goluud.

Gav transmitted the coordinates of the Sith Empire to Empress Teta, telling her that the Empire was now completely defenseless with its entire military invading the Republic. Naga Sadow’s fleet then appeared, and fired at Primus Goluud with some sort of electrical super weapon. Gav told Teta and Jori to leave the area, which they and Sadow’s fleet were able to do just before the red super giant went nova, taking Naga Sadow’s meditation sphere and Gav Daragon’s life.

Back on Cinnagar, Gav Daragon’s sister Jori took over operations on Aarrba’s Repair Dock after the conclusion of the war. Years after his lifetime, Gav Daragon was remembered for his role in starting the Great Hyperspace War, including in a compilation of Jedi history and lore created by the Jedi historian Tionne Solusar in 40 ABY. In the years after the Daragons, some historians pointed out that the Great Hyperspace War might have been avoided had Jedi Odan-Urr not saved the Daragons from Kahorr’s assassins, but Solusar believed that the Daragons could not be held responsible for the start of the war. The pair’s role was long remembered throughout history for blazing what was considered one of the most remarkable hyperlanes of the Old Republic era. The hyperlane, named the Daragon Trail, provided a passage directly from the Deep Core to Sith space. He was additonally mentioned in a historical text written by the historian Voren Na’al long after Daragon’s death.