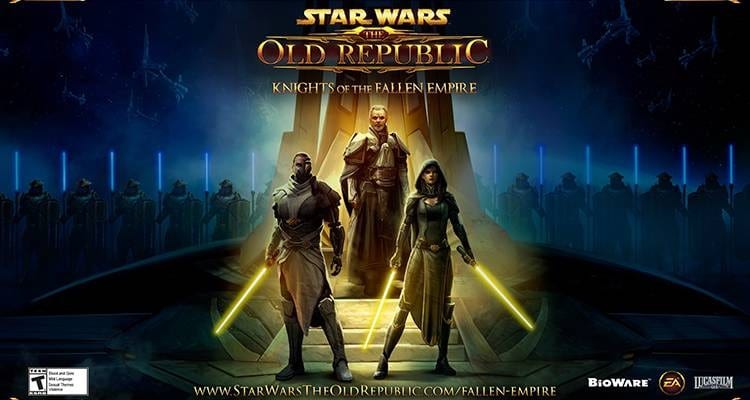 Star Wars: Battlefront isn’t the only game with a new trailer today. BioWare also has a release trailer for Knights of the fallen Empire, titled “Face your Destiny”.

It is an all ingame trailer, but pretty awesome still. Only thing I don’t understand is, why they did  a whole trailer without mentioning the fact that we are becoming the OUTLANDER? Pretty big selling point of the game if you ask me.

Knights of the Fallen Empire is a, “return to a deeper, more personal experience that delivers on the hallmarks of BioWare-style storytelling,” according to the developers. Players create their own adventure to new planets in the outer rim of the galaxy, meet companions and recruit them as allies, make choices that have the power to change destiny, and determine the fate of the galaxy. The expansion includes the first nine chapters of an evolving player-driven storyline, with new chapters continuing to release episodically.

This new adventure also offers first-time players an accessible point of entry to the exciting universe of Star Wars: The Old Republic. The digital expansion also includes a free Level 60 character, allowing them to jump straight into the Knights of the Fallen Empire storyline to experience a deep and personal adventure.

The story of Knights of the Fallen Empire focuses on the player, as their character becomes the Outlander, a veteran of the Great Galactic War. As the Outlander, players must confront a powerful new enemy, the immortal Emperor, Valkorion, whose dark destiny is tied to their own.

Check out the trailer below: