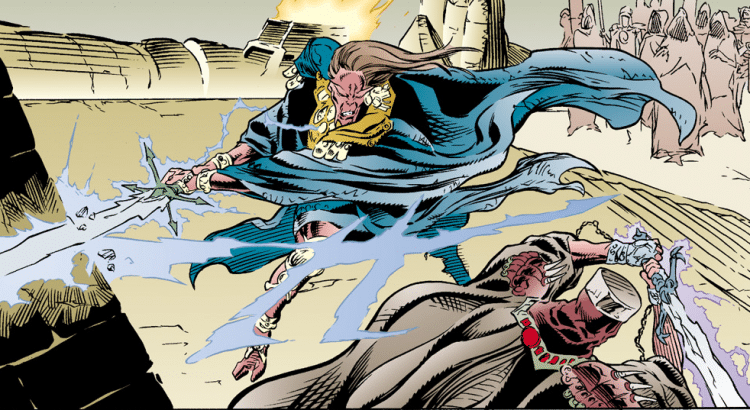 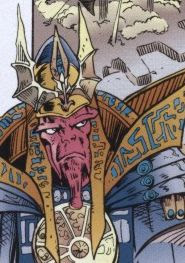 Ludo Kressh was a Sith Lord in the Sith Empire during the Great Hyperspace War. A conservative Sith Lord, Ludo planned to rule the Empire as the new Dark Lord of the Sith after Marka Ragnos‘s death. However, the unexpected arrival of the Daragons allowed Naga Sadow to engineer incidents which undermined Ludo’s support. Ludo eventually faked his own death and ambushed Sadow, only to be truly destroyed by Sadow’s fleet.

According to the overview of the Sith Empire on the Star Wars: The Old Republic website”(After the Great Hyperpsace War)…the last Emperor of the Sith managed to escape the carnage and fled into Deep Space with his most trusted Dark Lords.” Considering Ludo Kressh was technically the last Dark Lord of the Sith alive before Naga Sadow (who escaped to Yavin 4, rather than deep space), it is possible that Ludo Kressh perhaps staged his own death (once again) and made his way into Deep Space.

Fight for power
The death of Marka Ragnos in 5,000 BBY left the Sith Empire with a power vacuum, as several powerful Sith struggled to gain Ragnos’s throne and become the new Dark Lord of the Sith. Among them was Kressh, who sought follow in the footsteps of Ragnos; he wanted to keep an iron-fisted rule over the Sith people, and to keep the Empire stable and prosperous. His main competitor, Naga Sadow, felt the opposite, proclaiming that the Sith Empire had grown stagnant, and wanted to expand the borders of the Empire, who controlled a hundred or so planets, including Kressh’s fortress world Rhelg. Though they were not the only candidates for the title of Dark Lord, Sadow and Kressh were the strongest, and each hated each other with passion.

Kressh led the late Ragnos’s funeral procession on the Sith mausoleum planet of Korriban, though his rival Sadow was absent. Midway through the funeral, however, Sadow arrived, to Kressh’s great anger. He told Sadow that they would wait for no-one, and after placing Ragnos’s sarcophagus into his tomb, Kressh and his loyal men barred Sadow from entering. Sadow was resilient though, and the two rivals engaged each other in a vicious sword duel, watched by supporters of each faction. Kressh claimed that Sadow was only interested in furthering his own means, while Kressh cared about the fate of the Empire.

Sadow gained the advantage in the duel after a while, though Kressh soon recovered, and the two remained evenly matched. They were soon interrupted, however, by the spirit of Ragnos, who told them that while it was the golden age of the Sith, things may change, and to choose their paths wisely, before once again departing. Kressh saw this as a sign to make peace, though Sadow refused, and prepared to continue their duel. However, they were once again interrupted when a foreign ship set down on Korriban’s surface. Two hyperspace explorers named Jori and Gav Daragon had reached the planet through co-incidence, though they were immediately set upon and imprisoned by the Sith soldiers. Kressh thought them an invasion attempt by the Republic, and wanted them executed immediately, though Sadow saw them as an opportunity to expand the Empire. A meeting of the Sith Council was immediately called on Ziost to discuss what to do with the pair of siblings.

The Council met, and Kressh voiced what he felt should be the plan of action. He told them they should kill the Daragons and obliterate any evidence that they were ever on the planet, that they were spies from the Republic and any other course of action would result in cataclysm for the Sith Empire. The majority of the other Council members took the same stance, though Sadow and his former master Simus saw it as an opportunity to launch an attack at the Republic. The majority of the Council sided with Kressh, and ordered for Jori and Gav to be killed as soon as possible. Sadow, however, was determined to get his way, and went behind the back of the other Councilors, even those loyal to him, and freed the Daragons from their cells, framing it as a Republic attack. Master Simus was killed in the process. 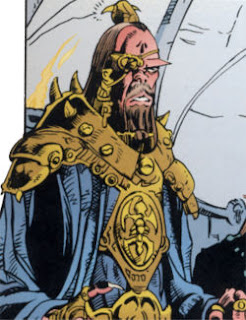 Skirmish with Sadow
Another Sith Council meeting was called immediately on Ziost, where Kressh mourned Simus’s death—although he was an opponent of the dismembered Sith head, Kressh still had respect for him. Sadow arrived late, and pleaded with the other Lords to elect him the new Dark Lord, that he would bring the Empire out of its stagnation and would conquer the Republic. Fearing further attacks from the Republic, many of previous supporters of Kressh sided with his rival, and dubbed him the new Dark Lord of the Sith. Kressh exclaimed that Sadow would prove to be the Empire’s end, and stormed off, declaring himself the new Dark Lord.

Sadow staged yet another Republic attack later that night, having many of his Massassi break into Ziost‘s dungeons and steal the impounded Starbreaker 12, the ship belonging to the Daragons. Kressh was informed of the attack by several of his loyal soldiers in his fortress on Rhelg, and went to witness the damage himself. As he examined the bodies of the men killed in the attack, Kressh uncovered a startling piece of evidence to suggest that the Republic weren’t responsible for the attacks at all. A piece of armor imprinted with Sadow’s symbol that Sadow had ordered planted there lay in the hangar; upon discovering it, Kressh called two of his most powerful backers, Horak-mul and Dor Gal-ram, to meet with him on Rhelg.

The two Council members had taken a great risk traveling to Rhelg, knowing that if they were discovered they would be executed for treason. He told them of his suspicions of Sadow, and pleaded with them to pledge their armies to his cause and to help him overthrow Sadow. They launched a massive assault on Khar Delba, Sadow’s fortress world, where the two hyperspace explorers were being kept. Kressh manned the guns of his own flagship, desperate to gain a few personal scores over his rival. Along with Horak-mul and Dor Gal-ram, Kressh caught Sadow’s defensive forces unawares on the ice-world, and within minutes Sadow’s forces looked to be crumpling under the pressure.

The battle raged on, and the next phase of Sadow’s plan was put into effect: Jori Daragon had fled Khar Delba on the Starbreaker 12, unknowingly carrying a tracer which would lead Sadow to the Republic. Kressh’s flagship attempted to shoot down the Republic vessel, but Jori managed to escape and enter hyperspace. Sadow’s actual fortress was on the moon of Khar Delba, Khar Shian and with Jori successfully scared into fleeing, the Sith Lord ordered his entire fleet, that had been hiding on the dark side of the moon after Kressh. Meanwhile, soldiers loyal to Sadow had been strategically placed in Horak-mul and Dor Gal-ram’s ships revolted against their so-called masters, killing them and taking control of their warships. The tables had turned on Kressh. 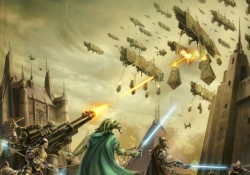 The Great Hyperspace War
With only one warship left intact, Kressh realized his chances of defeating his opponent were next to none, and gave the order to retreat. Although Sadow had managed to out-maneuver him before, Kressh had a plan. While Sadow and the other Councilors met on Khar Delba, Kressh sent his empty flagship in their direction, while simultaneously relaying a message proclaiming that Sadow was a traitor to the Council. Sadow took the bait, and had his new Sith apprentice, Gav Daragon, fire upon the warship, destroying it. With his rival thought dead, Sadow was in complete control of the Sith Empire. Kressh, however, was now free to maneuver and gain support while Sadow was absent fighting the Republic in what would later be known as the Great Hyperspace War.

After staging his death, Kressh allied himself with several of the other Lords, promising them wealth and riches if they joined him against Sadow. With his newfound support, Kressh named himself the Dark Lord of the Sith. Sadow’s efforts at attacking the Republic ended a debacle, and he returned to Korriban with only several of his ships remaining. Kressh was lying in wait. Kressh had a large advantage over his rival this time; he had a larger fleet, and Sadow’s men had just retreated from another battle. Sadow, however, was willing to destroy one of his own ships to kill Kressh, and sent a massive warship toward Ludo’s vessel. The two collided, killing the Sith Lord and everyone inside. Sadow had once again defeated Kressh.

Legacy
Kressh was buried in a secret room deep in a large Shyrack cave on Korriban. His tomb was rumored to be filled with the dark side energies of his hatred, causing visitors to experience extremely lifelike hallucinations. A group of Jedi died in the tomb when one of their own, driven mad by the illusions, slaughtered his companions. The Jedi Exile visited the tomb once, possibly taking his Sith war sword. The Jedi Exile knew unmistakably that illusions of Darth Malak and his followers, and a group of Republic soldiers which were just those—illusions. However, when she saw Kreia and her companions in the tomb, she could not discern whether Kreia’s presence was real, or also another vivid hallucination. After speaking with her, she discovered she was indeed another illusion. The corridors of the tomb were stalked by shyracks, as well as Force-sensing hssiss.