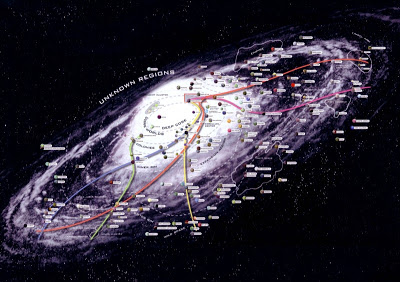 Among fans, the Galaxy is referred to as the Star Wars Galaxy or the Galaxy far, far away, or the GFFA for short. The Galaxy was said to contain a “type 3” civilization (in the Kardashev scale — whereas Earth is home to a “type 0.7” civilization). This scale takes into account the level of integration and civilization between peoples (albeit this integration also involves different species, rather than just racial variations of only one sentient species, as it is on a sole planet), which in essence form one single “galactic civilization”, given the political unification (despite the few separatisms) and the integration of the worlds in spite of the considerable distances (with effective means of transportation).Nothing connects the Galaxy with ours (Milky Way). However if we are to consider the crossover between Star Wars and E.T., we can infer the following: the Brodo Asogi leader, Senator Grebleips sent an expedition to another galaxy. This may have been Our galaxy which would have explained E.T.. The movie says that E.T. is being 3 million light years from home (our galaxy is only 100,000 light years wide and our galaxy’s closest neighbour (Andromeda) is 2.5 million light years away) so his home planet is so far away that it has to be in another galaxy, perhaps the Galaxy.

The Galactic Republic, Galactic Empire, New Republic, and the Galactic Alliance all occupied a single galaxy, known simply as the Galaxy.

There were approximately 400 billion stars and around half of these had planets that could support life. 10% of those developed life, while sentient life developed in 1/1000 of those (about 40 million).

Before recorded history, the first known Galaxy-spanning political entity was the Infinite Empire of the Rakata, which ended long before the forming the official so-called “galactic civilization””.

The Galaxy as an official entity began to exist millennia later, when Humans discovered hyperspace travel and met other sentient races. When several worlds and species came to know each other, they formed a loose affiliation that accepted common laws and currency, and the Galactic Republic became the “official” galactic government. The smaller Sith Empire rivaled the Republic, and the beginnings of that rival were religious—the understanding of the Force. The Sith were defeated and re-emerged several times.
Finally, after a millennium of hiding, the Sith managed to restore their Empire, after dissolving the Republic and replacing it with the short lived Galactic Empire. The Empire lasted for two decades of tyranny, but after the Galactic Civil War, eventually the Republic was restored. Despite this, the remnants of the Empire would continue to resist the new government for over a decade before finally signing a peace treaty.

Astrography
The Galaxy was divided into several regions. They are listed here in ascending order of distance from the core. These regions were further divided into various sectors, systems, and planets.

Deep Core
At the very heart of the Galaxy, the Deep Core (a.k.a. Core Systems) was a small region that hid unusual worlds. Due to the gravitational pull of the vast number of stars, local space-time was severely warped, making hyperspace travel difficult at best. The region was thought to be inaccessible until Emperor Palpatine found several safe hyperlanes into the region. The area remained an Imperial stronghold almost twenty years after the Battle of Endor.

Colonies
The Colonies was the name given to a region of the Galaxy between the Core Worlds and the Inner Rim. It was among the first areas outside the Core to be colonized, and the worlds here are typically heavily populated and industrialized. 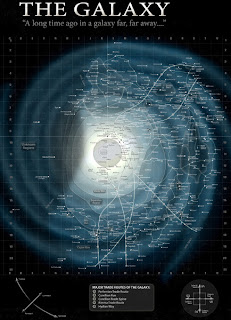 Inner Rim
The Inner Rim was a region of the Galaxy between the Colonies and the Expansion Region. It was originally just called “The Rim,” as it was expected to be the farthest extent of the Known Galaxy for centuries, but the Expanded Rim (later renamed the Expansion Region) was opened within a hundred years of the Inner Rim.
During the reign of Palpatine, the Galactic Empire ruthlessly controlled the Inner Rim. Rather than rebel, many residents chose to flee to the Outer Rim Territories.

After the Battle of Endor, the Empire, despite its unpopularity, held the region far longer than expected; many later resented the New Republic’s sluggishness in liberating the region. Many worlds, despite joining the New Republic, were openly afraid that the government was not strong enough to maintain power. Their concerns were borne following the return of Palpatine, when the Empire reclaimed most of the Inner Rim.

Expansion Region
The Expansion Region was an experiment in corporate-controlled worlds, with powerful corporations exploiting and profiting heavily from the planets for their raw materials, metals and ores. Inhabitants were oppressed while the corporations stripped entire stellar systems of all their resources. Eventually civil unrest spread from system to system. The Galactic Republic eventually took control of the system due to mounting pressure from its denizens by limiting or evicting corporate interests. Expansion Region worlds continued to be producers of raw materials and ores. However, most natural resources were exhausted by the Imperial era.

Mid Rim
With fewer natural resources (and therefore a smaller population) than many neighboring regions, the Mid Rim is a territory where residents work hard for everything they have. Several planets have built up impressive economies, and pirate raiders often hide in the relatively unexplored spaces far from major trade routes.

Outer Rim
The Outer Rim Territories was the last widely settled expanse before Wild Space and the Unknown Regions. It was strewn with obscure worlds, and rugged, primitive frontier planets. Due to its distance from the Core, the region was home to many supporters of the Rebel Alliance. The Empire’s Grand Moff Wilhuff Tarkin was assigned the difficult task of bringing the entire Outer Rim in line.

Unknown Regions
The term “Unknown Regions” most commonly referred to the large, unexplored region (which some interpret to have been outside the plane of the galactic disk) between Bakura and the Imperial Remnant, which was largely dominated by the Chiss Ascendancy. The Unknown Regions comprised only a few billion stars, out of a galactic total of 400 billion. For reasons yet to be demonstrated there was a lack of reliable hyperspace routes through the region. The “Unknown Regions” designation included uncharted areas in dense nebulae, globular clusters, and the galactic halo.

The dominating species was humans. Possibly originating from the Core Worlds, humans had been the basis of the major governments. Sentients other than humans (examples: Twi’leks, Hutts, Mon Calamari) were simply known as ‘aliens”. Aliens were also distincted as humanoid or not.

Although not considered a race for obvious reasons, droids formed a significant part, helping and coexisting with the population.

Extragalactic interaction
Extragalactic aliens (species coming from another galaxy) were believed to have visited, by unknown means, the Galaxy in an unknown point in the past for unknown reasons, and made contact with the galactic species. During the last days of the Republic and according to Republic HoloNet News Special Inaugural Edition 16:5:241, the Brodo Asogi leader, Senator Grebleips sent an expedition to another galaxy but all information about the outcome of this endeavor is dubious the least.

The Extragalactic Society was an organization devoted to the search for life outside the Galaxy.

The best known Extragalactic aliens were the Charon and of course the invaders Yuuzhan Vong who almost managed to destroy the galactic civilization, while just recovering from the Galactic Civil War. 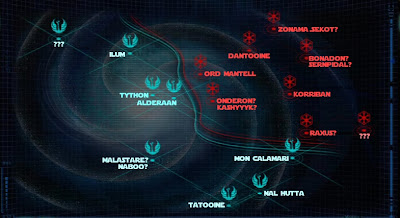 Speech
The lingua franca of the Galaxy was the Human language that evolved in the Galactic Basic Standard. Its origins must have been the vernacular speech of Humans and was partially derived from several ancient Human languages, like Olys Corellisi. Humans being the dominant species of the Galaxy, Basic has been adopted by many alien species as well.
The second most common language was Huttese, expanded through the criminal and financial activity of the Hutts, and has been as well adopted by other races that were in close cooperatoin with them through the ages, like the Rodians.

It was possible for droids to have fluency in millions of forms of communication, and based on them, could also understand and improvise in even more. Protocol droids were essential in interracial relations as translators and interpreters.