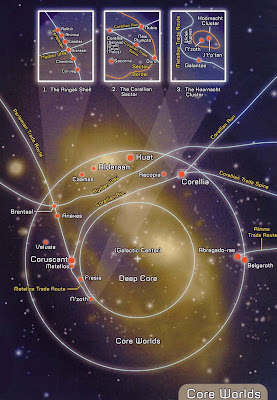 The Core Worlds (also known as the Galactic Core and, during the Imperial era, the Imperial Core) were some of the most prestigious, well-developed, well-known, and heavily populated planets in the galaxy. In astrophysical terms, the Core denoted the central area of the galaxy, and in broad terms this was true enough, but the precise usage of the term was sometimes more complex.

The major Rimward hyperlanes radiated outwards around little more than half the galactic disk, and the Core Worlds occupied a C-shaped region of space around the Deep Core, the heart of the astrophysical core, which was considered as a separate outlier area, facing in the opposite direction, and extending outwards towards the Unknown Regions.

25,053 BBY, the Galactic Republic was born with the signing of the Galactic Constitution in the aftermath of the Unification Wars. Its founders were a number of key Core Worlds known collectively as the Core Founders including Coruscant, Alderaan, Duro, Kuat and Humbarine. During that time, the Humans and Duros, reverse-engineering the Force-based technologies of the Rakata, invented the hyperdrive.

The Republic therefore was born in the Core Worlds and spread out over the galaxy. Due to its strategic location and heavy infrastructure, Coruscant was the capital of the Republic; thus bearing the coordinates 0-0-0 on hyperspace maps.

Later, the Perlemian Trade Route was mapped, linking Coruscant to Ossus, which became the domain of the Jedi Order over the subsequent millennia and a fortress world blocking Tionese and Hutt expansion into the Core.Over the next millennia, the Corellian Run was mapped, linking Coruscant to Corellia and beyond. The wedge defined by the two trade routes became known as “the Slice.” Since the stretch of hyperspace galactic-west of Coruscant was anomaly-ridden and impassible for current Republic technology to traverse, the government expanded eastward, instead. The Core Worlds‘ portion of the Slice was known as the Arrowhead, and soon the Republic expanded into the Colonies.

In 24,000 BBY, war broke out between the Republic and the Union; spreading both sides of the Perlemian. The Republic won by turning the Hutts against the Tionese; ending the Union’s existence as an independent state and paving the way for galactic domination by the Core-based Republic. By 23,900 BBY, the worlds of the former Honorable Union had all joined the Republic with the exception of Desevro which remained proudly isolationist. At first, the government on Coruscant wished for slow expansion, despite its promotion of hyperspace exploration. However, against the government’s wishes, the membership of the Republic boomed for its first millennium of existence, mainly due to worlds wishing to join as protection against the Hutt Empire.

During the Great Manifest Period (20,000 BBY–17,000 BBY), the Republic expanded eastwards across the galaxy into the Inner Rim and Expansion Region. Despite this, the Slice would remain the heart of navigable space. Eventually, the Republic expanded past the galactic-northern and -southern borders of the Slice, though most of the galaxy was still unknown, except for outposts such as Ord Mantell (12,000 BBY) and Malastare (8,000 BBY). The space west of Coruscant still remained unexplored since analogues to the Perlemian Trade Route and the Corellian Run in that direction still had not been discovered. Worse, progress was limited to dangerous one- or two-light-year jumps into a stretch of hyperspatial anomalies.

During this period, several key Core Worlds including Coruscant and Alsakan established holdings in the Expansion Region. However, this region suffered greatly as a result of Alsakan attempting to snatch control of the Republic from Coruscant. This resulted in seventeen Alsakan Conflicts, spanning from 17,000 BBY to 3,000 BBY. However, most of the fighting took place between their holdings in the Expansion Region, rather than in the Core itself. Needless to say, Coruscant won every conflict it fought. In 15,500 BBY, after a disastrous first contact, Coruscant was assaulted by Star Dragons in the Duinuogwuin Conflict. The conflict was peacefully resolved by Supreme Chancellor Fillorean and the Star Dragon philosopher Borz’Mat’oh, who together founded the University of Coruscant.

At some point before 33 BBY but probably well after 1,006 BBY, several Human inhabitants of the Core Worlds decided that the urban sprawl of their region, the stress of urban society and the lack of peaceful coexistence with others was not for them. They decided to settle Leritor, an unimportant world in the Mid Rim near the Corellian Run.

In 12,000 BBY, the Core Worlds came under the influence of the theocratic and humanocentric Pius Dea sect which posited one of their own Contispex as the Supreme Chancellor of the Republic. Over the following centuries, his descendants sanctioned several crusades against some rival alien sects in the Outer Rim which fought back; leaving the galaxy in a never-ending state of alternating hot and cold wars. Though Pius Dea rule came to an end in 11,000 BBY, the repercussions of these crusades would sour relations between the Core and the Outer Rim over the millennia. 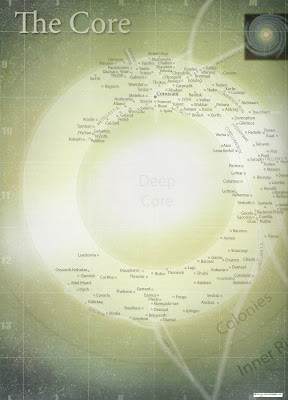