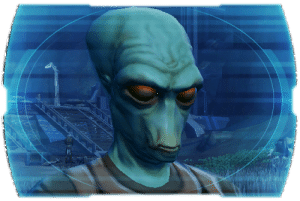 The Duros blazed some of the oldest trade routes and hyperspace lanes in the galaxy as they ventured into the unknown, millennia ago. This species achieved star travel before the founding of the Republic, and have almost entirely abandoned the soil of their homeworld to travel among the stars. They rank alongside the Corellians as the most seasoned space travelers in the galaxy. One of the Duros’ earliest colonization efforts was on Neimoidia, and over the millennia, the Neimoidians became a genetically distinct offshoot of the Duros race.

The Duros were humanoids with smooth blue-green skin, red eyes, lipless mouths, long thin noseless faces and green blood. Olfactory organs beneath their eyes were responsible for their sense of smell. Both females and males were bald, though both genders were easily distinguished. Their large red goggle-like eyes also had slit pupils. Duros females laid eggs as they are descended from ancient reptiles, and like the Neimoidians they were born in a larval grub stage, but unlike their cousins who left the raising of their young mainly to the state, the Duros took care of their offspring from birth.

The Duros homeworld of Duro has weathered millennia of neglect. As the Duros took to the stars, much of their planet became increasingly polluted. As Duros political power was transferred from ancient royal rulers to a wealthy coalition of interstellar shipping firms, all connection to ancestral roots were severed. The Duros people embarked on a bold era of expansion, choosing to live in orbital cities or far-flung colony worlds. 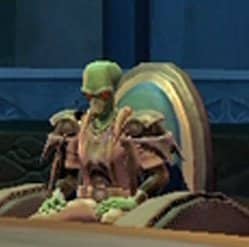 The temperate surface of Duro was converted into farmlands, and immense automated food factories processed comestibles to be shipped elsewhere. As these territories spread, it encroached on the habitats of endangered wildlife, resulting in the extinction of millions of Duro’s indigenous animals.

When the Empire came into power and seized control of Duro, it began mining operations near the ancient Valley of Royalty. The Sith Empire‘s unsound practices further spoiled the ecology of the planet, irradiating a vast stretch of land with toxic waste.

The repeated vilification of the Neimoidians following the Jedi civil Wars led many of that species to abandon their heritage and pose as Duros. A major section of Nar Shaddaa became a refuge for Neimoidians in hiding.

Duros tend to be a calm, peaceful individuals and this aspect of their personalities enhances their acceptance in all parts of the galaxy. As individuals, they are extraordinarily dependable workers. Though often quiet and sometimes taciturn, when called upon they can be gifted storytellers, capable of retaining the interests of extremely diverse audiences for extended lengths of time.