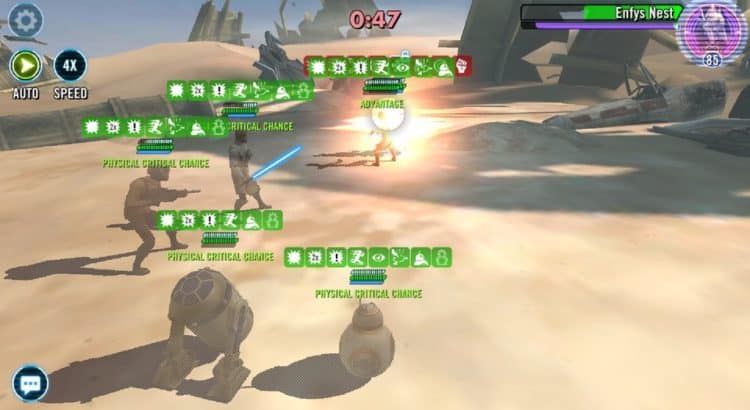 While last week may have seemed relatively quiet from the surface, The SW:GoH team has been working to bring you lots of interesting new content in this week’s update. Check out the notes below for information about everything included in this update, scheduled for today.

GEAR 12+
Gear Tier 12 has been expanded to include the 4th and 5th slots with an all new set of Gear pieces. Equip these brand new items and strengthen the Galactic Power of your collection! These pieces will be available exclusively in the Heroic Sith Raid to start, but will arrive in other locations later.

We’ve also made changes to the Heroic Sith Triumvirate reward structure which you can read about here.

NEW CHARACTERS AND REWORKS
In this update we’re bringing a brand new unit and a rework of an existing one. Range Trooper is an aggressive Empire Support that provides other Imperial Trooper allies with Assist Chance. For more information on this unit, check out their Character Kit below.

Grandmaster Yoda, receives an update to each of his abilities as well as his Zeta ability. For more information on these updates, check out their Character Kit post and the Game Changer videos for exclusive footage of the newly rework Grandmaster!

GRANDMASTER’S TRAINING MYTHIC EVENT
Along with his rework, Grandmaster Yoda has now received his Mythic Event. Use your Jedi squad in this 3 tier event to battle Grand Master Yoda and face ancient foes.

EVENTS
Down Range
Learn battle techniques and earn shards for the all new Range Trooper in this marquee event.

PVE SHIPMENTS ADDITION
Two additional slots have been added to PvE Shipments for non-exclusive Gear XII pieces.
These will include:

REINFORCEMENT MATERIALS REMOVED FROM CANTINA 6-A
Reinforcement Materials are no longer available in Cantina 6-A. They have been added as first time rewards on all Fleet Battles, and will be farmable on nodes in Stages 3, 4, and 5 of Fleet Battles.