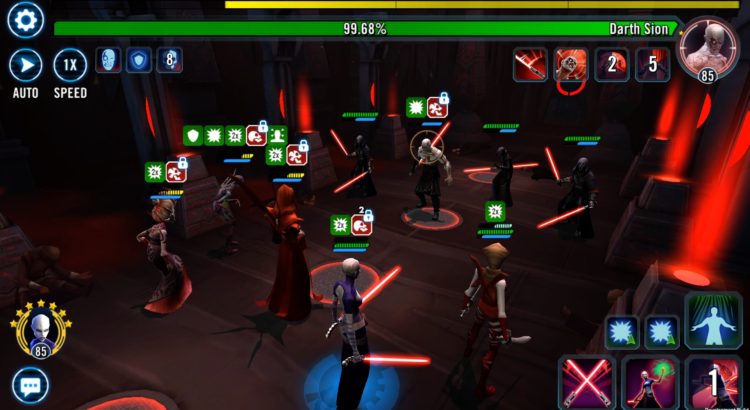 Here is the latest on the upcoming Sith Triumvirate Raid Changes coming in Star Wars: Galaxy of heroes. These changes are expected to occur next week.

We wanted to take this opportunity to restate our ongoing strategy around releasing and curating new content in Star Wars: Galaxy of Heroes. Specifically, we want to provide information about upcoming changes related to the recently released Sith Triumvirate Raid.

With each new Raid, our goals are to bring a new level of challenge to the game and to provide innovative gameplay which encourages strategic thinking and “outside the meta” play. We recognize that when a Raid is new, success in the Raid helps define high level competition in the game. Later, when the Raid becomes widely understood, we begin the process of designing a new Raid so players can be challenged again in this unique aspect of the game.

We regularly evaluate, and update, the current state of any Raid. This regular evaluation can lead to changes such as tuning tweaks, adjustment of rewards, and bug fixes. As a part of this process, we actively look for interactions that undermine the “spirit” of any new Raid and decide whether or not we need to make changes to the Raid to prevent them.

Teams that can perform infinite loops within the first week of release fall within this category of “undermining the design spirit”. We consider each incident of this nature individually to determine whether corrective actions are warranted. While we do have several processes in place to prevent these interactions from making it into the live game, they unfortunately can still happen. In order to protect the integrity of the design and the experience, we will continue to actively curate the Raids (and any other content) going forward.

Before proceeding with specific changes, we want to thank you all for your excitement for and participation in the Sith Triumvirate Raid. We’ve enjoyed watching the players engage and best the ancient and terrible Sith Lords. Your excitement in tackling one of our most challenging pieces of content to date, inspires the entire studio to continue our commitment to making the best game possible. Thank you for being part of the improvement process. The Galaxy of Heroes community is an amazing, dedicated, and passionate group of people. You are all key to the game’s current and future success!

In the context of our above philosophy, we wanted to let you know that we are going to be making the following changes to The Sith Triumvirate.

In Phases 3 and 4, Darth Traya’s Bonds of Weakness will no longer activate “on-damage” abilities. This will affect the following characters:

We’ve made this change in response to some behaviors we’ve seen in the game around Stormtrooper Han’s ability kit. Specifically, Stormtrooper Han’s Unique, Bluff, and his first special ability, Draw Fire, were facilitating “infinite loops” of turn meter gain in Phases 3 and 4 of the Raid. In an effort to make the change uniform and not single out Stormtrooper Han, we’ve updated all characters with on-damage abilities to also not be affected by Bonds of Weakness. Darth Traya’s Raid Descriptions will be updated appropriately to reflect this change.

We’ve also made another change to Darth Traya in the Raid to prevent another rising, unintended strategy we’ve observed. Some players are using a combination of stealthed units and Nightsister Zombie to go well past the intended Enrage of Darth Traya. Now, when Darth Traya becomes Enraged she will dispel all positive status effects on her enemies and apply an undispellable, unresistable buff immunity as well.

Finally, our initial data indicates Expose is stifling other teams from finding a competitive place in the Sith Triumvirate Raid. We will be changing the amount of percent health damage Expose does in all Raids. Recognizing this change has an impact on overall balance, we will be lowering the health of the Sith Triumvirate Raid slightly as well to bring it more inline with our intended design.