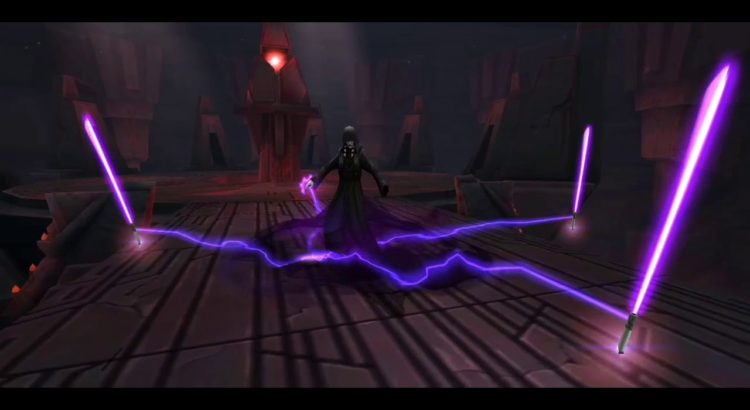 There is currently a bug in phase 3 of the Sith Raid with Finn and C-3PO. The developers are gonna fix it next year when they figure out whether Finn lead or Traya tenacity is the thing to change:

It’s come to our attention that there is an unintended strategy/interaction involving Finn(Leader – Zeta), C-3PO, Han Solo, Chewbacca, and BB-8 that allows players to auto Phase 3 of the Sith Triumvirate (Heroic). As we’ve indicated in previous updates, “when we discover an infinite loop that allows players to trivialize end game content, we try to act as swiftly as possible.” Learning from the issues with our Critolyte fix, we’re going to wait until the new year before we address this issue. We want to make sure we have the time to work through all ramifications of this change before we put it into the game.

C-3PO was an interesting character to test as he can synergize with so many units and factions. We wanted him to enable a wide variety of interesting strategies and teams, even some that we didn’t intend, but there are certain areas where we have to step in, IE infinite loops. While we do extensive testing internally, the sheer amount of man hours (and squad combinations) players have logged with these characters after a couple days absolutely dwarfs our QA efforts.

After evaluating our options today, our current approach centers around making some changes to either Finn (and his leader ability) or to Raid Traya (and how she gains or loses tenacity when toppled). We are evaluating a few additional options, but the first two seem the most viable. We want to take some time testing each out to ensure that we find one that has the least amount of impact on the playerbase and the game. As we get closer to a solution we feel comfortable with in-house, we’ll both work with players in the community to get their feedback on our proposed changes AND communicate our thinking before we roll out any changes.

These sorts of changes are always tricky,but our hope is that in communicating transparently, we can find the best all-around solution. Thank you so much for your patience as we work through it.

In closing, if you feel like you would like to engage with the Sith Raid with this team in the short term, be advised that the interaction will be removed/modified in the new year.

To SBCrumb and the other devs if they read this:

The easiest solution that would piss off basicly no one and, and also prevent something like this happening in the future is letting Traya stack her Tenacity while toppled. The already working teams for the phase would work the same, this team would not.

If you change Finn lead… Well, then enjoy the following shitstorm from angry players.

For arena, and the like. Finn teams were already good on offense, and crap on defense. This is the same, but not quite. If you do some of those “extensive internal testings” you’ll find out the Finn team that was shown only work on rare instances, and it’s hard to pull off. And needs comparable mods. And will not work on defense. Redditors just made too much fuss about one video.

As a closing thought: the Sith raid at this point is not a new content. It’s already like 9 months old. Is it really a problem if one of the four phases can be done in an easy way? There are still 3 other hard phases to do. And as you probably know, the raid is not enjoyable anyway. About the same timeframe after the tank raid released, we got Thrawn, who made soloing the 3rd phase possible. Almost the same thing. How about giving us some hint about a real new content, with something genuinely new gameplay additions. The fame is really stale right now. You’re probably working on something... I hope.