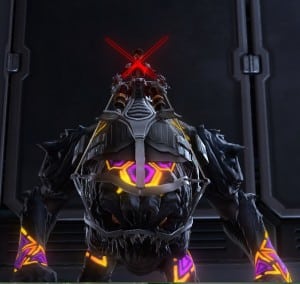 Eric Musco was really engaged in the community yesterday. Besides the Faction change post we wrote about earlier, he also updated the community about the PvP vs PvE Mounts Philosophy:

Hey everyone,
I know there has been a bit of frustration from our PvP community regarding a Rancor mount going into the Cartel Market. Although I had mentioned at the time that there would be Rancor mounts coming to both the CM and Operations, I thought it would be good to explain our philosophy on mounts. Especially around their exclusivity.
For PvP mounts, such as Season rewards, what you are going to tend to find is that they are exclusive variations of a mount and not necessarily a completely exclusive model (not to say we would never do an exclusive model, that is always possible). For example, you will not find a Rancor that looks anything like Giradda’s Rancor, but you can find other Rancor mounts. Aside from the unique appearance, what sets this mount apart is exclusivity. That variation is not only exclusive in appearance, but it is only available for a limited time. Meaning anyone who comes into the game now, or who was not Tier 1 during Season 1, can never acquire that mount. Although I can understand that having a unique variant, and not a unique mount, can seem less exciting. It actually ends up being more exclusive in the long term!
For mounts that come from Operations, such as the Wings of the Architect, we treat these a bit differently. As you can tell from the Wings, and other mounts such as Titan-6, they are themed directly around the Operation where they drop. Our intent is that this will stay that way and those mounts will remain exclusive to those Operations. However, one thing that is different here than with the PvP mount, is that these mounts will always be present in-game. This means that although right now, only some of the best Operations players in the world have these mounts, in time they will become more accessible as new content is released.
I hope that clears up our approach to putting mounts in the game, and explains a bit about how we handle exclusivity around those mounts.
-eric

One point that Eric brought up that I really like:
PvE mounts will be exclusive to and will be based on the Operation. Since PvE content will not leave, those mounts will always be available. I am a PvP’er and I can imagine some time down the road doing an operation just for the mount. I would obviously wait a little while (wait until gear improves) and then run it later. Right now I just don’t have the gear for a NiM DP, but when they release a new set or two, it won’t be that hard to get DF gear and be able to complete it (or whatever gear it actually takes). Think of how hard it was to get campaign gear way back when…. now they practically give that stuff away once you hit 50.