Check your mail! You should Just have received an email from BioWare saying that there is an upcoming varactyl mount in the new “Freelancer’s Bounty Pack” in SWTOR. 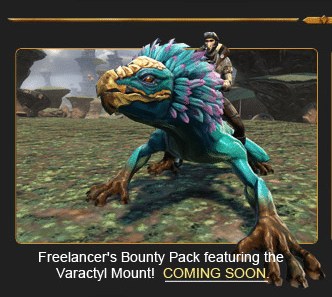 The Varactyl was also a rideable mount awarded to any player who bought the digital download edition of Rage of the Wookiees in Star Wars Galaxies.

This species of cliff-climbing lizards is native to the planet Utapau. Loyal and smart, these creatures are often ridden for quick transport from one place to another. A loyal, plumed female varactyl named Boga is the mount of choice of Obi-Wan Kenobi during his pursuit of General Grievous in Episode III: Revenge of the Sith.