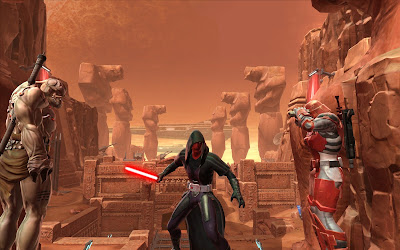 The developers of SWTOR announce they are in the business of busting bugs and fixing exploits to make the game more fun and fair for everyone. This is a big job in an MMO as large as The Old Republic but apparently, there’s a large team available to deal with these issues and to create new content for SWTOR.

Rich Vogel, the Executive Producer of SWTOR talks about how servicing the “live game” comes first and that everything else such as creating new content comes later. He also explains how fixing some of these issues can be very tricky and how they go about determining which issues need to be fixed first. Here is some of what he has to say.

“If an exploit is discovered that threatens players’ experience in the game or the in-game economy, we will usually try to create an Emergency Patch to fix that exploit. Before we declare something an emergency though, we have to validate the issue with our internal Quality Assurance, or QA team. They gather data working with our Customer Service, analytics, and development teams to determine the extent of the exploit and the steps needed to reproduce it. Once we have the steps, we work on a plan to fix the issue.”
“Not every bug is created equal. Some bugs – even ones that might look simple – take a long time to deal with and some might not be able to be reproduced (as they may be random occurrences under special circumstances). With that in mind, we use a triage process to prioritize our bug lists. This helps us determine which bugs we fix first based on the bug’s severity (which is how many people it affects). We estimate the severity of bugs by looking at volume of tickets sent to our Customer Service team, Forum posts, and using our telemetry data from the game, amongst other things.”

Click here to read more on how the Developers of SWTOR are working to get rid of all or as many of the bugs and exploits as possible, so we can have a better experience when playing this amazing MMO.