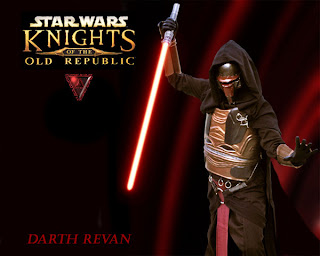 One of the most anticipated novels for SWTOR fans this year must be the Revan by Drew Karpyshyn. The books will be out later this year and should give some answers to what happened to one of the all time biggest force users.

If you are like me must have been wondering what has happen to the guys, but also how strong his force powers actually is.

In Drew Karpyshyn latest blog posts he addresses this issue. Apparently a book about me playing video games – being the ultimate pownzor – won’t work in books. Karpyshyn states that video games and novels works in different ways and  “are meant to convey different experiences and the two representations of the character simply cannot be laid on top of each other.” – witch is kind off dull really, and might be the main reason why I play way more videos games then read books.

To put it bluntly, Revan in the book will not be the uber-powered death machine you controlled at the end of the video game. You might have min-maxed your character to smack Darth Malak down in seconds without breaking a sweat, but in a book that battle would have been a brutal, hard fought affair spread over multiple pages. In a video game it’s fun to kill hundreds of Sith Masters, but in a book that would just be boring. It would suck out any drama or conflict or tension, and as an author I have no interest in writing that.

Now, I suspect some of you are already getting worked up about how Im ruining SW canon by nerfing the Revan from the game. Well, tough. The game was a game the powers and abilities you had in it were ways to make the game fun. They were representative of Revans power level versus enemies faced in the game, but they weren’t a blueprint of his abilities in the persistent fiction of the Star Wars universe.

That doesn’t mean Im going to ignore Revans accomplishments as detailed in the game. The high level events and history are canon. Revan did defeat Mandalore and Darth Malak. He was an incredibly powerful Jedi. But a powerful Jedi in story terms (films, TV, books) is very different from a powerful Jedi in game terms.

Don’t forget to catch the full article over at Drew’s blog.