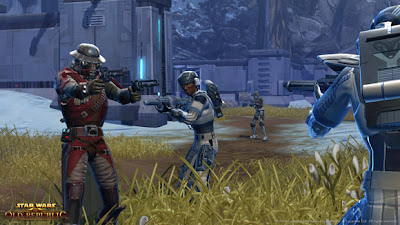 Gamasutra has just released yet another excellent interview with the founding fathers of BioWare Ray Muzyka and Greg Zeschuk. This time the doctors describes why they believe why Star Wars: The old republic stands out from other MMORPGs, in addition to talks about Dragon Age and Mass Effect.

It’s a rather lengthy Q&A spreading over four pages, but well worth the read for BioWare and SWTOR fans.

There are a lot of experienced people that have worked on MMOs in the past working on The Old Republic, but it’s just hard to imagine how incredibly difficult it could be for a company that hasn’t released an MMO yet to support an MMO. I think players trust the design choices that BioWare is going to make, and innovations in that area, but the support for a game like that — a game as a service — how are you guys approaching that leading up to launch?

GZ: The preparations are as massive as the game. It’s interesting. It’s a good point. It’s something that’s been foremost in our minds for quite a while. Obviously, we have a certain level of confidence on the game side, because that’s very familiar territory for us. There are subtle nuances of how it’s different, server-based gameplay and that sort of thing.

But the whole service piece has probably been the thing we’ve learned most about. And I think the good thing there, though, is we have a lot of people who really do have a lot of experience. The folks at BioWare Mythic, a lot of them are part of the team, and they did it for 10 years, 15 years. They ran game services.

GZ: Yeah, so it’s invaluable. I think the other point there, that’s definitely a true one, is that any new company has to create almost the new neural pathways of how these things function. And that’s one of the reasons we do a lot of testing, real-life simulation testing with fans playing and seeing how it scales.

And the actual act of launching the game, you don’t go from like zero to 60 in half a second. You have to build that over time. So, I think one of the key things is how we actually scale the population base, how many units are out at retail at various times, and how we grow. Because really it’s the long-term goal you have to look at. You really have to look at the long view. It’s very different than, I think, what the traditional boxed product view is these days, which is your first two months it everything, right? Our first two years is just the beginning.

RM: If you look at it in one way, it actually makes the problem easier to visualize. It’s like the product is not just what you’re putting in a box or what you’re selling as a digital download. The product is actually the service. It’s the ongoing quality experience.

So, if you look at it from a different angle, than it’s like: Oh, so holistically, you have to make sure is at a BioWare level of quality, the game itself, the content, the technology, the scaling, the hardware, the framework, the social interactions, the experience, the connectivity — all aspects of an MMO have to be at the same level of quality that fans expect when you put the BioWare brand on it, and the Star Wars brand. You have to deliver that. You have to deliver that kind of experience.

For us, it’s kind of challenging, but we really do have a lot of people on the team that have done this before. It doesn’t make it easy, because when you look at a game as ambitious as Star Wars: The Old Republic, the amount of content in it is probably equivalent to all the content from prior BioWare games combined. You know, we’ve got to deliver that to the fans enough to keep them occupied for a long time. You know, we have to continue to deliver more content over time afterwards, too.

As Greg said, you have to be very thoughtful about how you scale up the service post-launch to make sure you’re never really compromising the quality of service, always maintaining it. If you approach if sort of one issue at a time and kind of look at it holistically, it’s actually surmountable.

We’re pretty confident we can deliver it, but we’re approaching it with humility, knowing that we’re going to learn as we go, that we’re going to encounter things that we can’t anticipate now. We just have to respond to those and use all the great people on our team and the feedback from our fans, try to build on that and deliver a great experience.