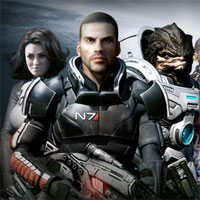 Could a Mass Effect MMO beat out TOR when it comes to profits?
In a recent investor’s note, Mike Hickey predicted that a hypothetical Mass Effect MMO could make more money for Electronic Arts than Star Wars: The Old Republic will.
But is this really shocking news?

First, the ME franchise has done really well for EA and there is a historical weakness surrounding Star Wars games, which is part of what Hickey made his predictions based on. This is due in part to the fact that royalties have to be paid on all Lucas Arts titles and themes.

Hickey said, “Looking forward, we believe BioWare could develop an MMO based on their highly successful Mass Effect franchise, which should have a considerably better (relative Star Wars MMO) margin profile, given the dilutive nature of the LucasArts royalty.”

But of course, there is more that goes into making a great MMO than just a popular title/franchise to build upon. MMOs are tricky business so it has to be done effectively to pull in the subscriptions and keep them over time. But there could be some hope for a game of this type, based on the predictable success.

So if you’re still dreaming of a Mass Effect MMO, don’t give up the dream just yet. It’s possible it could happen since it will prove quite profitable for EA to do so in the future. They’re not speaking up about whether or not it will become a reality but they also have not completely ruled out the possibility. So you never know, a Mass Effect MMO could be in the works for a near future.

What do you think: would a ME MMO beat out SWTOR?