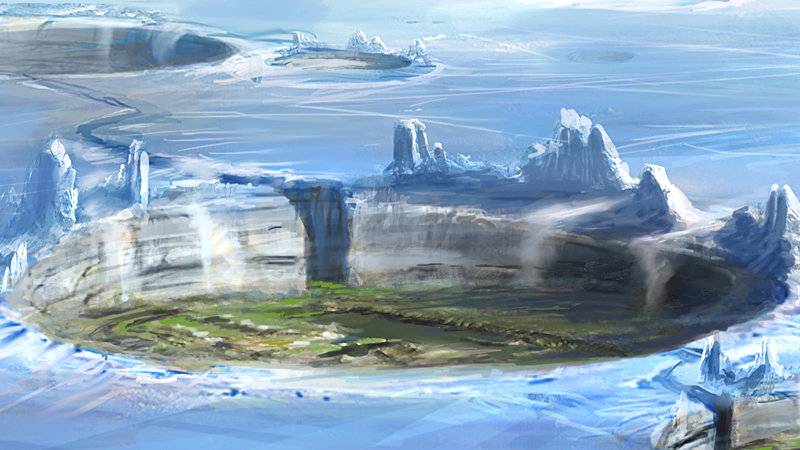 Hey guys… Today they just announced a new planet that will appear in Star Wars: The Old republic!

This planet is going to be awesome.. As you will read below, this planet is where many Sith Lords, Mandalorians, and creations of Sith alchemy were sent to be imprisoned during the Great War. The Imperial forces will give it their all to free them but the Republic is going to do THEIR best to keep the evil forces contained..

Republic knowledge of Belsavis predates the Great Hyperspace War, but for centuries, the planet warranted little attention. With the exception of some unusual volcanic activity, the planet was deemed, in all ways, unremarkable. Belsavis was added to the star charts then summarily dismissed as nothing more than another curiosity of the Outer Rim.

Fifty years ago, while investigating the planet’s tropical rifts that seemed to defy the ice shelves in completely unnatural ways, Republic scientists stumbled upon an ancient prison constructed by the Rakatan Empire. Behind the force fields and ultra hard metals were the most terrifying prisoners in the galaxy. Republic efforts to explore and secure the dilapidated network of vaults were impeded by ferocious alien species, and nearly unstoppable droids.

Realizing it was only a matter of time before the vaults and stasis chambers containing the worst of these prisoners failed, the Republic committed a force to maintain the complex, and establish a new Republic prison on Belsavis’ unused surface. In secret Strategic Information Service meetings it was decided that this new prison, dubbed “the Tomb”, was only to be used in cases where execution was impractical or impossible.

Once the Great War erupted, the Tomb’s population rapidly increased. Mandalorians, Sith Lords, and creations of Sith alchemy were sent to Belsavis for containment. As rumors of the Tomb’s existence spread, Imperial Intelligence began searching for the legendary super prison. Despite Republic efforts to keep its location a secret, the Empire learned of the operation on Belsavis and sent strike teams to liberate all the imprisoned Sith.

In the short time since the Imperials arrived, the prison grounds have been transformed into a labyrinth of battle and chaos. The Empire has discovered that extracting its loyal subjects from among their violent fellow inmates will not be easy, and even though the Republic is rushing to restore order, the threat of the mysterious evil breaking loose from its ancient prison is becoming all too real.

[link] to article at swtor.com

Check out what fans are saying from the article source:

“”This planet looks amazing, very interested in its dark story and cant wait to explore its terrain.” – DarthPhenex

“This planet looks awesome. I want the next one to be Manaan.” – JacenD

“”Excellent another planet 🙂 It looks like Bioware are really pushing the boat out with this game with regards to content (quality and quantity)compared to other MMO’s at release. Fingers crossed for a some space action at some point but I guess the amount of planets and different class storylines will keep me amused for a fair while after release as it is.” – AidenCast