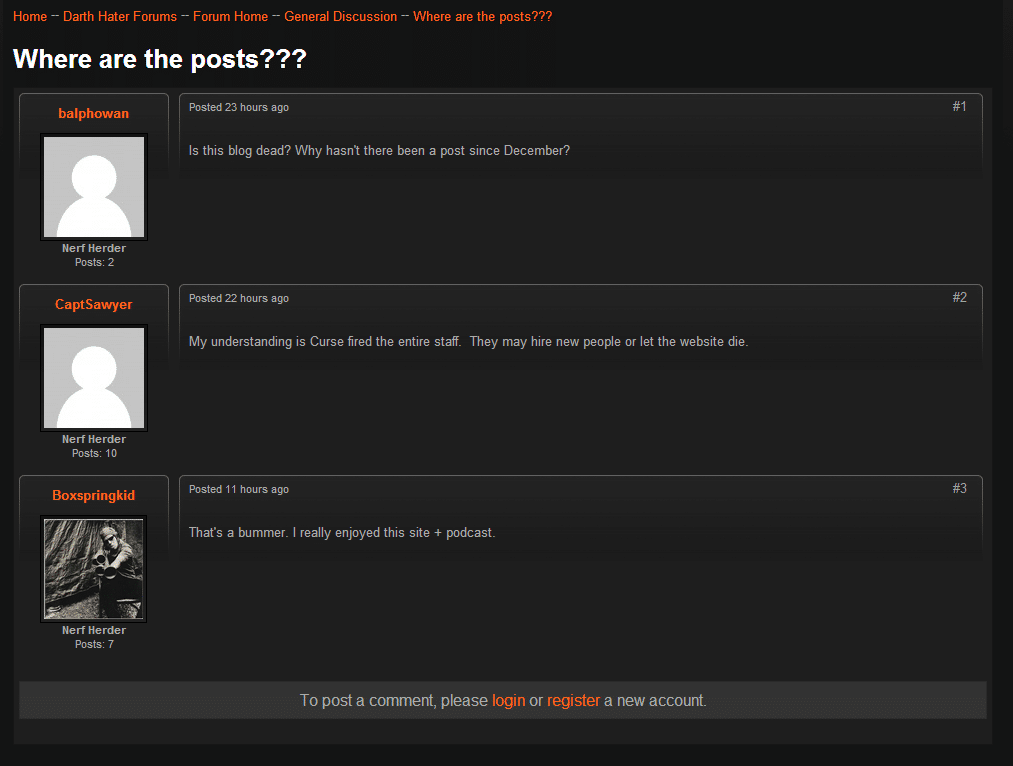 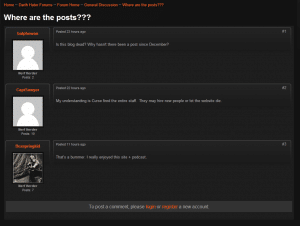 If you follow DartHater.com, you probably noticed they have not posted any new content since the end of December. The rest of the community definitely noticed and it seems we now have a reason. The whole staff has been let go by Curse and no one knows whether or not they are going to try to revamp it with new staff or

One of the most active members of the DH team, Jaspor, admits on Reddit that he is no longer working for them but he doesn’t seem to have any additional info on what will happen to the site in the future. In fact, it seems no one really has any information at all other than- they were let go.

It was just back in September 2011 that Curse bought Darth Hater and made them a part of the Curse network. Most of the community seemed happy about it and the DH crew promised their core values would not change- and they didn’t.

But now, just over a year later, it seems Curse has let the whole team go and didn’t even bother to issue the community an official announcement. There are no new posts since the end of December and we’re two weeks in 2013 and there is no notice, post, news release or anything from Curse explaining what is going to happen to the Darth Hater site. The forums show recent threads of fans asking what is going on. It’s really sad news for fans who visited the site religiously for their SWTOR news and updates.

Many SWTOR fans were diehard fans of Darth Hater.  That is the beauty of a true gaming community- there’s a fan site for everyone. So it’s really sad to see them go without so much as an explanation or announcement, just leaving fans in the dark waiting for another update that never comes…

The team members who have spoken out about it say they still play SWTOR and won’t be leaving the community so perhaps we will see some of them step up in a different way.

Justin Lowe says he still plays SWTOR and it sounds like he will still be part of the community:

Regardless of what the trolls think, I still play #SWTOR 30+ hours a week.

So what do you think this means if it’s the end of Darth Hater? Many claim their content wasn’t what it used to be the last couple of months so there’s a good chance Curse was already cutting them back and prepping them for the let-go. Or maybe it was a total shock to them as well. Either way, we’re sorry to see them go and as for the rumor of new staff coming in, we just don’t think it will be Darth Hater without the original crew. They’re the only other fansite that’s been around as long as us, years before the game launched. (We’re over 4 years old).

This brings up the next great point that has fans concerned: what does this mean for the community?

There are still dedicated fans like us here, the TORwars crew (who are also completely volunteer), Dulfy and others dedicated to bringing you the best news, guides and information on SWTOR. And while we’re sorry to see them go, Darth Hater fans are always welcome here!