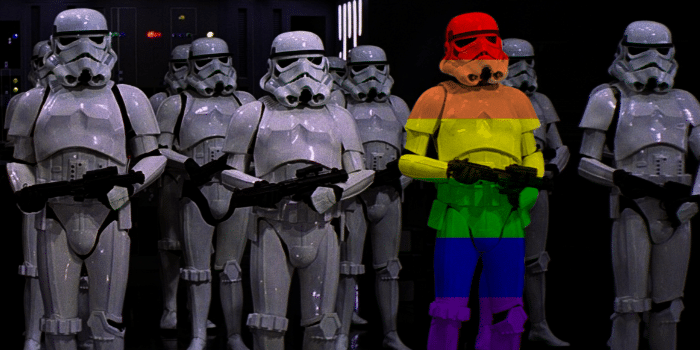 Since before SWTOR even launched, we have discussed the topic of same gender relationships (SGRs) in the game. There are some who were for it, those who were against it and others who just didn’t care. The one thing that remained consistent throughout is that the topic causes a lot of controversy.

While BioWare first said there would not be SGRs in the game, they later listened to fan reaction and changed their minds, promising that there would be – only not at launch. The reasoning made perfect sense- they just didn’t have time to change the story arcs properly. They didn’t want to simply go in and add the option for romantic encounters with either/or sex of character in the game. Rather, they wanted to do it right, in true BioWare-story fashion and make some characters open to SGRs based on their personalities and previous story line.

Fans of all types, including those in the LGBT community seemed pleased with this answer so the game launched and everyone waited.

To date, there has been no official word from BioWare about how they plan to handle SGRs and with many key staff members leaving, the game going to a free to play model and other updates and content changes, players are left wondering if it will ever happen.

Forum user Natashina, coordinator for the FAQ thread “Same Gender Relationship Clarifications” which you might be familiar with from the SWTOR official forums, has been following this story closely in order to update her community with any news or changes.

Timeline of SGR Progress in SWTOR

Last September Stephen Reid, former Senior Online Communication Manager, promised that same gender romances were coming in The Old Republic. This was statement was used by the moderators at The Old Republic forums until late September of This year.

This thread started on January 17th, looking for more clarity on the content that was promised. This has gone through several incarnations over the year, usually locked at about 100 pages. Currently, the latest incarnation is up to 399 pages.

Over the months, the LGBT ToR community has tried every polite, respectful and patient way to try to get further information regarding a possible timeframe. However, their questions are going unanswered.

The next official update was in March at BioWare’s ToR Guild Summit on March 6th, made by Daniel Erickson. I was personally there for this and remember many attendees of the Guild Summit were curious about the answer and pleased with what he had to say:

When we do this, we wanna do it right, we wanna do it with the characters that make sense, that we always knew that we wanted to do it for those, so you guys know and we’ve talked about it before, it ended up being a budget and scheduling issue. There are romance arcs that we wanted to do that didn’t make it in the game, we knew which characters (I’m not gonna tell you)… [some audience joking about characters] So the short answer is, it’s never changed, it’s still coming, it’s coming when full story comes, and when is full story coming? This year. So we are still on track.

I remember it all very clearly and in fact, believe I still have personal video footage of the entire Q&A on SGRs at Guild Summit. So here we are 8 months later, a year since launch, at the end of the year and there have been no updates on the matter.

Since then, members of the LGBT community have been trying to find out whether or not SGRs are still coming to the game. They have tried:

*Private Messages to Moderators and Developers on the forum boards
*Twitter and Facebook
*Email and Snail mail
*”Ask the Devs” and other such developer “Q&As”
*The Livestream cast, with over 25% of the questions related to same gender romance content and not a single question addressed

And so far, all forms of communication have gone unanswered. Is BioWare ignoring the LGBT community? A simple answer saying, “Times have changed. The game is going in a new direction and we might not be able to do this as promised” would give closure to those who are just looking for an answer. Why can’t BioWare just answer their questions?

A Confusing Turn of Events

Also, on September 7th, the PvP developer, Gabe Amatangelo made very brief off-hand comment on a video about SGRs (nothing official whatsoever).

Hall Hood, current lead writer for ToR, made the following Tweet that evening:

“Hall Hood @hallhood (1 of 2) To all the folks who have been expressing interest in SGRs, here is the official word from Gabe Amatangelo…”

It was deleted within hours of it being put up. Members of the forums managed to get it copied before it got deleted but the original and cached version of the original are nowhere to be found. Plenty of people in the forums, however, claim to have seen it as well. So why Tweet and then delete? I am also unable to find the video at this time but if anyone still has a link to it that works, we’d like to add it to the story. Edit: Video is here

The last time a moderator even came out and spoke to the thread was on September 7th, the same day as Mr. Amatangelo’s comment: http://www.swtor.com/community/showp…postcount=1164

If BioWare and EA truly take pride in presenting LGBT content and representing the community, why are they not doing more to provide information to the community and answers to the questions? Whenever BioWare has had an issue they could not discuss before, they would at least acknowledge it and say “We cannot talk about that at this time but we’re working on it” or something similar.

For this issue, there seems to be an intentional lack of coverage/feedback along with potential cover-ups when statements were made recently on the issue. What’s going on BioWare?

An entire community that BioWare/EA claim to support are sitting on unanswered questions. We’d like to know why as well. We’d like to see BioWare address this issue once and for all and provide some solid answers to the players. How difficult can that be?

Special thanks to Natashina and the “Same Gender Relationship Clarifications” thread and forum participants for providing more info into what the LGBT community thinks about SGRs in SWTOR and how BioWare is responding to the subject matter.