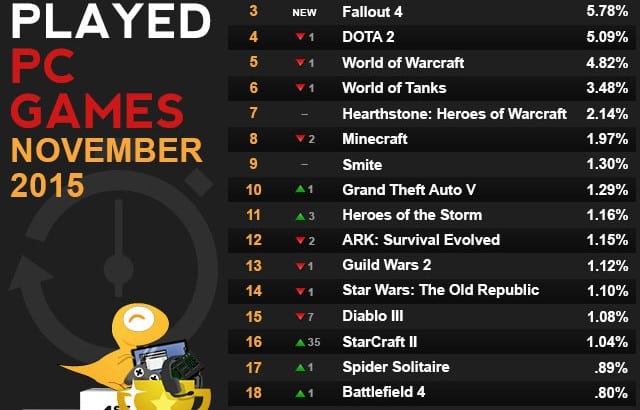 While it saw a bit of a dip in the month of November, SWTOR is still in the top 20 most played games, according to Raptr. It was ranked at number 14 for this past month, just below Guild Wars 2 and above Diablo III. It’s above StarCraft II on the list for that month and only beat by behemoths like World of Warcraft, DOTA 2 and Minecraft. League of Legends still dominates the top of the list and CS:GO is also hanging on to a top spot.

So what does this mean and why should you care? Well, honestly it gives us a great look at how SWTOR is still holding its own in the gaming scene, especially as an MMORPG. There are many who will try to say that SWTOR is dead or has died but the stats don’t really line up with this. Seeing the game still in the top 20 of Raptr’s most played, and seeing it among so many other big name games consistently shows us that people are still playing it.

If you want to learn more about who is playing SWTOR and where they are playing, you can check out TORStatus.net for updated rankings on the servers and more. You can see the top 20 servers as well as more info about the game, updates added to the game and server ranking by regions. There are even graphics depicting the stats. These statistical graph pages are based on my previous personal project for the RIFT: Planes of Telara.