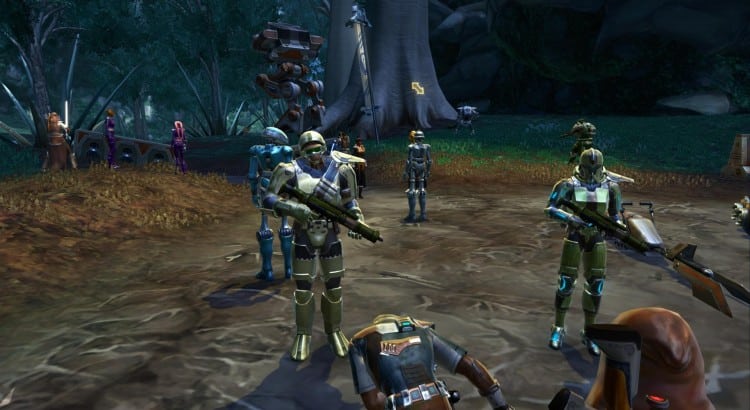 Lead Designer Michael Backus, posted a lengthy forum post  that details  the companion balance changes they plan to do based on feedback. Check it out:

Hello, everyone.
My name is Michael Backus, and I’m the Lead Designer for Star Wars: The Old Republic. I wanted to take a minute to apologize for the recent Companion changes and address combat balance. I wanted to do so personally because as fans of Star Wars: The Old Republic and our customers, we cherish your feedback and value all of you, and I feel you deserve to hear this information directly.
I would like to go over why the changes were made, what we’ve learned, and what’s going to happen going forward. There’s a short summary at the bottom if you want to skip the Why’s and get to the What’s.

Why the changes were made

Combat balance is a tricky thing. So many factors contribute to the question of, is this too easy or too hard–ability rotations, number of enemies and their abilities, player play style, player skill level, player class choice, Companion role, and even how well your computer can run the game. All of these things and more impact how well you play and how successful you are in combat. Jennifer might say, “This game’s a snap,” while Joe might say, “This is the hardest thing I’ve played in my entire life,” and there’s literally no way to tell who is “right”. The best we can do is create goals and do our best to make sure as many players as possible hit those goals. We posted our goals with different content types recently, here.

The one thing that was obvious was that Companions were overpowered in 4.0. We came to this conclusion, not only from player feedback and our own playtests, but from watching how players were playing—it is not ideal to send your Companion into combat in a [Heroic 2] and then go make tea, only to come back and collect your loot. We want combat to be engaging, to be fun. We want combat to be something, since you do it for so many hours, that can challenge you. If it’s too easy, we risk players not being engaged and getting bored. If it’s too hard, we risk players leaving and not even trying certain content anymore.

So, in 4.0.2 we toned down Companion power significantly to be in line with our stated goals. And that’s where the problem occurred.
What we didn’t realize was how with Knights of the Fallen Empire gameplay had evolved. As a community, you were playing differently than we had expected. I’ll give you an example.

Emergent Gameplay
[Heroic 2]s. Before Knights of the Fallen Empire, Heroics were not very utilized content. Most players ignored them after doing them once. So when we highlighted areas of improvement for our leveling experience, we knew we wanted to make Heroics sexier. We wanted players to have good reason to go do them, but also give players a reason to join up with their friends. What we failed to realize was how much most of you would enjoy them, but also how frequently you would engage in them. [Heroic 2]s were initially meant to be challenging content for what we would say is an “average” player. If you had good gear and really knew how to play well, you could solo them but you’d still have to pay attention to what you were doing. If you had expected gear for your level and didn’t think of yourself as that skilled, you’d probably find a friend to join you so you could both reap the rewards together.

With Companions being the power level they were, “everyone” began enjoying them. And that was the point that we hadn’t realized. By reducing Companion power, we took that away from a lot of you. You could still engage in [Heroic 2]s and beat them, but they had become arduous, even grindy to many players.

Our misstep was in not realizing that our goals we had set no longer fit with the game all of you were enjoying. The emergent gameplay that was created didn’t fit what we had embraced as our mandate within the Design Team.

Going Forward
So, what does that mean going forward? We will be increasing the power level of Companions. And while they won’t be as powerful as they were when Fallen Empire launched, the increase will be significant. I have gotten together with the Design Leads and we have re-discussed our goals for combat and content difficulty. We want players to enjoy [Heroic 2]s and level up their Alliance. You can find the exact changes coming in tomorrow’s patch, below. And I assure you, we will continue to carefully watch how content is being enjoyed and adapt as necessary.

Thank you for reading and we look forward to more of your feedback as these changes go live.
May the Force be with you,
Michael Backus
Lead Designer