Since Star Wars The Old Republic (SWToR) changed its subscription model to Free-to-Play  (F2P), a lot of opinions were raised about whether it was the right thing to do or not. Some quickly labeled SWToR as a failure that didn’t live up to the hype , while others saw this as a necesary change that helps the game’s long-term growth. Whether this change was successful or not remains to be seen, however first indications as reported by James Ohlen and the recent EA investor’s call are positive. 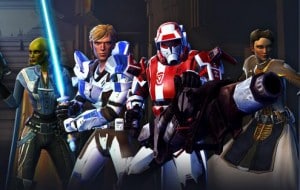 Free-to-play might not be such a bad thing after all!

A new article over at Gamasutra.com, argues that non-paying players, actually help the growth of such games. The author of the article cites three major reasons for opening up a game to freeloaders. Among other things F2P players help bring in other new players that eventually will turn into subscribers,  they show their appreciation in ways that help promote the game and they serve as good target audience for advertising.