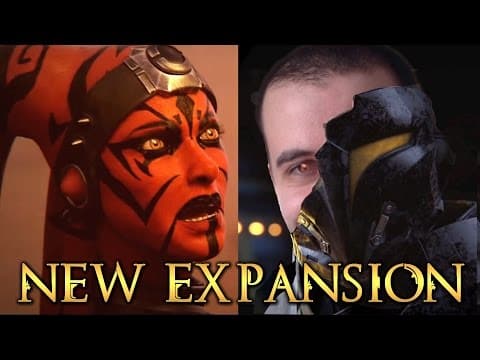 Once the long-awaited Knights of the Fallen Empire for Star Wars: The Old Republic launches, certain activities will not be available in the game anymore. To be specific, quests such as the Makeb staged weeklies and the Nightmare achievements for Eternity Vault will be gone. You also need to know that many of the basic story missions will not be available once you begin the KotFE missions, and the developers have stated that those missions will affect the story in KotFE, as well.

There is only one more month left until the expansion is available to the public, so we need to prioritize which mission achievements you must have before you get the expansion. Here are six suggestions to get you started on the right path.

The first suggestion is to do as many companion missions that you possibly can. Many of them only require that you go talk to your companion over and over on board your ship, but sometimes you will be asked to travel to a planet to do something for or with them. These usually turn out quite interesting.

It seems that there has been some confusion about class stories because of some posts on the official forum. Some players think that the companion stories are going to disappear completely, but this is wrong. However, it’s true that once you begin Knights of the Fallen Empire storyline, you will not be able to go back to the companion missions that you didn’t do. This is probably because the choices you make will affect the KotFE storyline.

You can typically get through the companion mission quickly. The easiest way is to purchase them gifts. There is a convenient vendor on the fleet that will sell rank 1 and 2 companion gifts for cheap. If you have not done any companion missions at all, you should definitely use the gift options first. It will cost around 100,000 credits at the highest, but if you achieve this you can earn more affection while actually doing the missions. After you finish the missions, you will then have spent less time and money on gifts to max out your affection, if you choose to do so. If you are only interested in doing the missions, then you will be great with just getting the rank 1 and 2 gifts.

If you have not played through the Shadow of Revan storyline yet and the prelude flashpoints, you need to do this as soon as possible. There are a few soft spots on Rishi, but once the story gets to Yavin, it’s a ton of fun to play and the nostalgia factor gets turned up to 11.

Even though BioWare first stated that they would not be getting rid of any of the nightmare versions of operations, this was changed a few weeks ago when the Community Manager Eric Musco stated that nightmare Eternity Vault and Karagga’s Palace will not be there when the expansion launches.

Even though Musco stated that the associated drops, like Karagga’s hat, will be going down to the hard mode versions of those operations, the titles and other related achievements will not be accessible after the launch. This is the main reason we suggest that you run these now.

Unlike the nightmare version of the other two operations we have talked about, this one will not be leaving. Its nightmare version varies mechanically from the hard mode version, however it’s still a level 50 operation. This means that at its most hard difficult, the majority of the attacks will not land, making it easier to fight. If you are all about hunting down achievements, you will want to get a group together to run the operation before the expansion comes out. Once the changes are made with KotFE, then operation will be at level 65 and just as difficult as when it was first released.

There is another post on the official forum where Musco stated that the Makeb Staged weeklies are going to be gone forever, but the reasoning was more straightforward this time around. We think that part of the reason is because no one did them and it was quite complicated to complete. It takes three weeks to do the staged weeklies, so if you are just now starting from nothing, you will hardly have time to finish them.