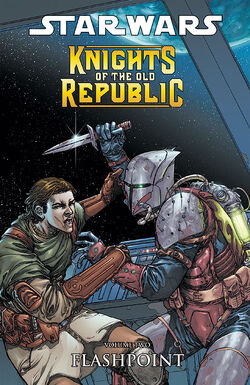 As Zayne Carrick and his allies continue their run from the Jedi and Republic pursuing them, things take a turn for the worse as they happen to find themselves on a planet being attacked by Mandalorians – and to make things worse, Jarael is captured by the brutal warriors, taken to a nightmarish experimenting facility. Zayne knows he must save the Arkanian woman, but the task will be far from easy, as he will have to venture into the very territory of the Mandalorians to find her.

Knights of the Old Republic Volume 2: Flashpoint does a great job of both flowing well with the last volume and being a different enough story that it doesn’t feel like we’re just following strictly the story of Zayne – Padawan fugitive. We’re seeing the development of other characters and storylines, too – even the antagonists such as Lucian Draay. He gets a whole arc in this volume, exploring both his character – giving a sort of reason for why he’s the way he is – and his background. That’s right, he’s not just, “Lead Bad Guy” anymore! Now he’s, “Lead Bad Guy with Mother Issues” (that’s not cliché, right?). Really though, I did like this whole segment – the focus on his background was thoroughly enjoyable, and it certainly raises your curiosity concerning a few certain things.

With the exploration of Lucian’s character, we also get some time devoted to the other Jedi Masters involved in the Taris Padawan Massacre. This was nice, but it also raised a few questions in my mind, namely… Why are these people Jedi Masters? Seriously, this isn’t just a reader’s bias via seeing them as evil, mean people, but these people should not be Jedi Masters. Lucian makes a joking comment about how they’re dancing with the dark side and Raana’s nickname is the, “Wild One”. I will reiterate – WHY are these people Masters?! Don’t the other Masters of the Jedi Order see something weird going on here? I can’t imagine with how these guys act it’s impossible to spot it. The whole thing’s just baffling to me.

Another character I enjoyed seeing was a certain future Sith Lord: Alek Squint… Squint… Let’s just call him Alek. He didn’t get nearly as much development as someone like Lucian, but he still got some nice scenes with Jarael that have me hoping his character will be used a lot more in future volumes. We even got see Revan briefly, but it made me think that he’s perhaps a bit EMO. You know, with his hood constantly up, covering his face, all in black, talking about how no one understands him and his goals. I just know under that big face-covering hood is some black eyeliner and lipstick.

One thing I sort of have to question, though, is something pertaining to Saul Karath’s appearance. Don’t get me wrong, I definitely enjoyed his inclusion, if only because it was another neat tie-in to the original Knights of the Old Republic game. The thing I found slightly odd, however, was his behavior during said appearance. When the Mandalorians and Republic forces are fighting over Vanquo, Zayne’s ship has to fly through them to shoot to hyperspace; when Saul Karath notices this, he says a line that basically consists of, “Divert all attention to Zayne Carrick, even if we’re fired on by the Mandalorians!” Uh… Really? You’d try to capture/kill a person the Jedi are searching for at the risk of being shot and your ship potentially being damaged? For his character, that seems just idiotic. 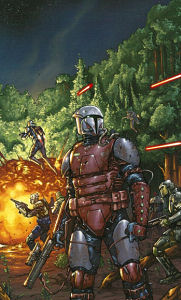 Moving on, the art was once again a very solid aspect in this volume. I have no complaints about most of the visuals, as they were consistently stylish and detailed at the same time. Notice how I said “most” of the time, however. Very similar to the last TPB, at about three quarters through the volume the art style suddenly jumped from being great to… *shudders* My god, when did Ken-Zayne get here? And Barbie-Jarael? Seriously, why do they have to keep doing this to us? The art’s fine, then we get… this! It’s like if you’re listening to some nice, peaceful, classical music… You’re happy, drifting in your thoughts… Then BAM! MARILYN MANSON is suddenly SCREAMING in your ear with NO warning at all! Pretty jarring, right? Yeah. It is. Perhaps the case in the comic isn’t quite as bad as that, but it’s still the same sort of thing, and I fear this being an ongoing pattern with each TPB.

As far as the story aspect goes, that was definitely another solid aspect of Flashpoint. We got to visit a few new planets, such as the banking world of Telerath, a fairly interesting place that I would like to be explored in the future a bit more. Maybe the question of why weather and settings change so fast (you know, with how it’s paradise and then suddenly Bespin) will even be answered. Anyway though, the variation in stories – whether it’s Vanquo and Jarael’s capture, Lucian’s backstory being explored, or Telerath and meeting Zayne’s father for the first time – was very enjoyable. The highlight of these stories was probably Jarael’s capture and the ensuing adventure to break her out of the prison/torture and experimentation chamber of the Mandalorians’. Of course, Jarael’s always been my favorite character of the Knights of the Old Republic series, so and considering how much time is devoted to her in this segment (obviously) it could be some slight personal bias talking there. 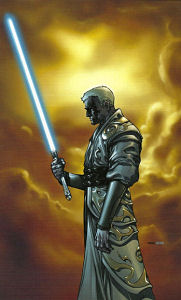 On the other hand, the Vanquo plot was my least favorite, if only because of the minor annoyances I had with it – such as the one I mentioned above with Saul Karath and how the Mandalorians just were suddenly on the planet and no character knew about it before they were right there. This is the first thought that occurred to me when I saw that two-page fold of Gryph screaming that the Mandalorians had arrived, the warriors suddenly everywhere… You guys didn’t hear them before they were almost literally trampling you? Really? You probably should pay attention a little bit more, considering you’re also on the run from the Republic and Jedi and everything.

With luck, future volumes of this comic series will have this kind of variety story-wise, but I suppose that remains to be seen (by me, that is – I imagine since all volumes are out now many people already know the answer).

All in all, Flashpoint was an excellent follow-up to Commencement; I’d even go as far to say that it’s better than it’s predecessor. Only time will tell if the third volume, Days of Fear, Nights of Anger, will live up to this level of quality. 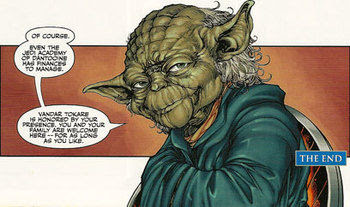 MizzeeOH is Swtorstrategies new reviewer. When ever he finish up a kotor related comic, book, game or what ever, you can be sure to see a review of it here. You can find reviews from MizzeeOH on Man in Black Reviews and NJOE as well.