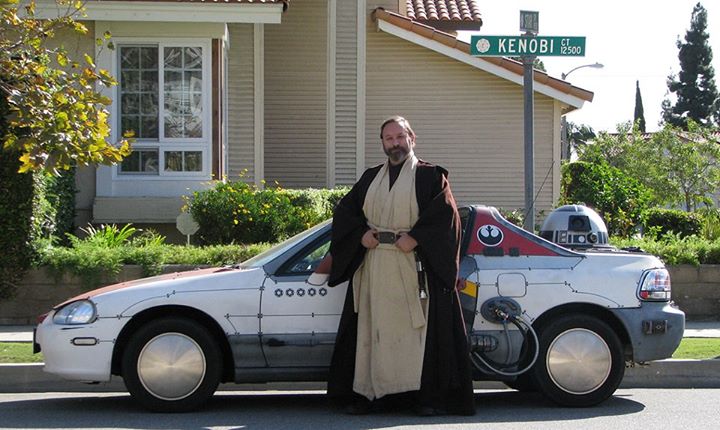 The true star of the show was this car in the employee parking lot, captured by “monsterbrick” on Flickr. For a little background, this was from a Legoland Star Wars day promotion and Monsterbrick is a huge Lego fan that creates some pretty awesome stuff in addition to having a seemingly amazing collection that makes me very jealous. (More about this later).

The pics are from 2009 but are making a reappearance in popularity on the Internet. Perhaps because of the revive of Star Wars fandom? Who knows but if you never saw it before, you’re going to love it. And if you did, you might still enjoy seeing it again. And then he got us a great shot from the driver’s side with this commentary:

the car was very detailed….with a lightsaber hilt on the e-brake….it even talked star wars phrases for an alarm.” And then there was more Lego: So we couldn’t just let it rest here. We had to know more about this car and its owner, Obi-Shawn.

With some additional digging, we found this great story on Zimbio from 2010 with more info about the car and owner:

“Shawn Crosby AKA Obi-Shawn has put his heart and soul into creating this Star Wars inspired H-Wing Car Fighter complete with a trunk mounted R2D2! The Star Wars tribute vehicle was put together by Shawn over many years and was made out of recycled junk. The underneath all that carefully sculpted junk is a Honda Civic Del Sol. He uses the vehicle for charity events and raises money for children. The specification is as follows. Weapons: Dual side-mounted laser canons, bumper-mounted proton torpedoes and a dash board mounted targeting computer. Astrogation: Aft-mounted droid, R2D2. Affiliation: Rebel Alliance.””

And FanBoy.com has this great story, along with a picture of Obi-Shawn himself with the H-wing. The story talks about how Shawn is much more than just a fanboy; he also travels many times a year, often for charity. Can you imagine to looks on little kids’ faces when they get to see this? I love so much to hear about people doing good and giving back with their time and when you can do this while incorporating it with your hobbies and passions, all the better! 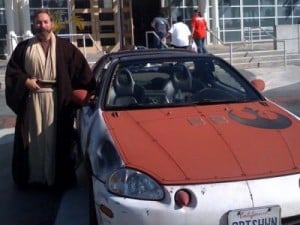 So… the journalist in me couldn’t stop digging because I wanted to learn more about this guy and what he’s up to. So I found him on Facebook and he has built a Z-wing!

As if that isn’t cool enough, strolling through his public pics, it seems he makes the majority of this from reused and recycled items. You would be surprised at what some of those parts really are.

I mean, who can’t love a guy like this? Hopefully we can bring you some more info about Obi-Shawn and his Z-wing soon. 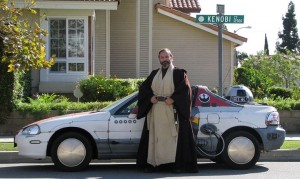