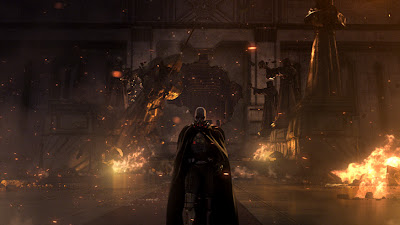 Alessandro Baldasseroni, character modeler and texture/shader artist for Blur Studio, revealed some interesting information regarding Star Wars: The Old Republic, during an interview with EUCast.

While Baldasseroni could not confirm if the previous cinematic trailers would be included in the game, he did say “but for sure we are going to do more like, in game cinematics of this kind, with this kind of style for the game itself.”

Scenes in The Old Republic that are similar to the cinematic trailers are definitely something to look forward to. Baldasseroni worked on designs for characters like Darth Malgus, the Sith Lord that appears in both trailers.

Baldasseroni also hinted at more trailers or other work by Blur Studios for TOR, but could not go into further detail.

The entire interview will be released in Monday’s episode of EUCast.