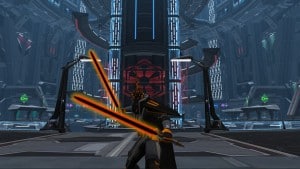 BioWare posted the patch notes for Game update 3.1 as they are on the public est servers right now.  All content and features listed in the preliminary Patch Notes are not final and are subject to change.
With it Tait Watson, posted a lengthy forum post you can read below the patch notes.

Ranked Warzone Arena Season 4 has begun! Get in there and go berserk! Season 3 leaderboards have been archived.

New Legacy Unlock – Improved Mounting! You can now summon any vehicle or creature mount while moving!

The Gray Secant has returned from its travels! Participate in the Relics of the Gree event from February 24th at 12:00 GMT to March 3rd at 12:00 GMT.

One of the things that many people have asked for is a better look into what’s coming up. Outside of Bug Report replies and the maintenance messaging synopsis, you don’t really get a full picture of what’s coming in upcoming patches until the Patch Notes go live the day before. I wanted to change this and give you insight into what you can expect in the next week’s patch earlier. This is part of our continued effort to be more communicative of upcoming changes and content. However, we do realize that having information early and then subsequently having it change can cause friction, so if we find that t-he constant changes to the patches are causing more harm than good due to releasing the information early, we will stop posting preliminary notes. This is an experiment, and we’ll see how it goes.

There are a lot of stipulations that come with this, however. While we definitely want to get this information out to you, we can also see how this information can cause problems when things that are listed don’t make it into the patch (or, on the opposite side of the coin, when the preliminary notes don’t list something you expected/wanted to be in the patch). As such, I’ve compiled some answers to questions that I think may come up, either now or when the final notes are published:

I do want to reiterate that the notes are subject to change. This doesn’t mean that stuff will only be removed – things are added the Friday before a patch goes out all the time. Due to the nature of how patches change, though, the preliminary notes won’t be updated as things are added/removed – the final notes will reflect the final patch. I know it sounds like I am harping on the notes changing a lot, and that’s on purpose. This is the main concern we have about releasing this information early – that it will mislead people into thinking this is in any way a guarantee. It’s not. In fact, it will very likely change. I’d say they have about a 98% chance to change.

Without further ado, if you accept that these notes are very likely to change, open up the spoiler tag and enjoy!

All hail the Lord of Mandelore.

We are supposed to be going up, not down

He truly is guys listen to me!

It’s not a story the Jedi would tell you

That line was unsettling

So that's why he wasn't killed.