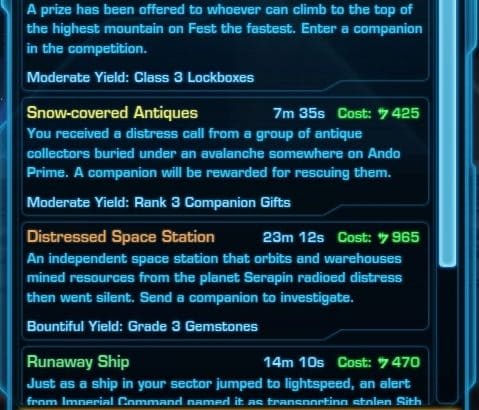 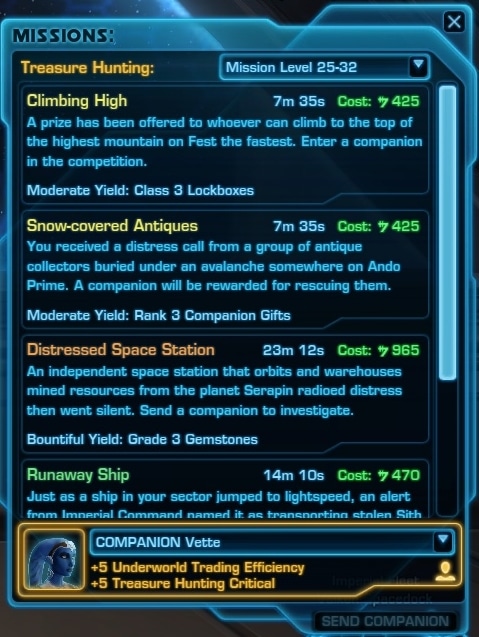 Over at SWTOR Economics, you will find some interesting conversations. We are especially interested in his Crafting Ideas series that is currently undergoing. He’s been telling us his ideas for improving the crafting portion of the game and also explaining how this would improve the overall economy of SWTOR. With that said, the latest edition talks about Treasure Hunting Lockboxes. Many people feel like they are causing problems in the game and he addresses that in this blog post. As usual, he breaks in down in three sections:

If you haven’t read his first post in the series, Crafting Ideas: Component Conversion, then you should go and do that first. Now come back take a look at his take on the Treasure Hunting mission imbalance.

Here is a snippet:

“There were a number of game design choices that have led to the current state of concern surrounding Treasure Hunting Lockbox missions.  While this Mission Skill in particular has garnered concern in the community, the underlying game design decision apply to the other Mission Skills as well.  The first and most pervasive change has been the Influence system for companions and the impact that maximum Influence has on the companion in the crew skill system.  There are two bonuses for companions that scale based on Influence level, Critical Rate and Time Efficiency.  Each additional level of Influence increases Critical Rate by 0.5% and Time Efficiency by 1.5% reaching a maximum of 25% and 75% respectively at Influence 50 level.”

When we look at the game design for this mission, we can see where there are potential problems that lie. There is also a second and third game design choice that could help resolve some of the current issues with the imbalance of this mission. As usual, he doesn’t just complain and tell Bioware to fix it. He offers real, logical solutions. If you take the time to read through to the end and consider his solutions, it makes a lot of sense. I can’t help but wonder if Bioware is listening. Perhaps they should hire him as a consultant.

So tell us what you think: is the mission imbalanced? Do you agree with these options to fix it?