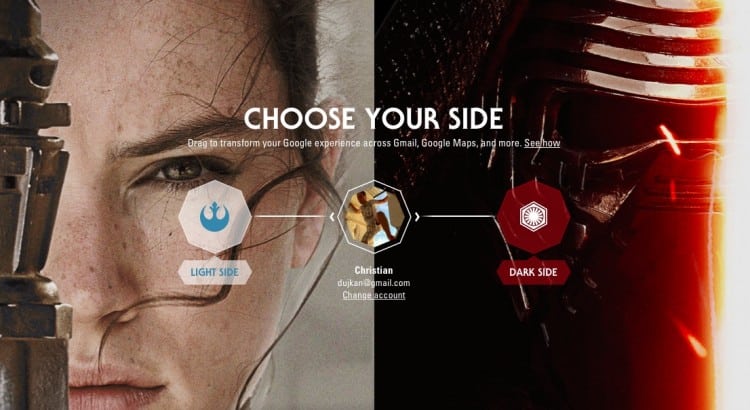 The crew at Google are big fans of Star Wars just like the rest of us. VP of Product Management, Clay Bavor made a great post today on the Google Blog telling us his own personal story of becoming a Star Wars fan. He goes on to tell us a little about the Star Wars fans behind the scenes at Google offices, and then he tells us about something really cool from Google, teamed up with Lucasfilm and Disney. You can find it at google.com/starwars. It’s a place for fans, by fans, and starting today you can choose the light or the dark side, and then watch your favorite Google apps like Gmail, Google Maps, YouTube, Chrome and many more transform to reflect your path.

Here’s a snippet from today’s blog:

It probably isn’t a surprise that there are tons of Star Wars fans like me here at Google. You can regularly spot Darth Vaders, dogs dressed like Yoda, and even the occasional stormtrooper, roaming the halls of our data centers (probably still looking for those droids). So when we first heard about Episode VII, we started thinking about what a Google tribute to these epic stories might look like: “Wouldn’t it be cool if there was some sort of Star Wars thingy in Search? The Millennium Falcon in Cardboard would be sweet! What if Google Translate could decipher galactic languages?”… and on, and on, and on. As this list of ideas grew, so too did the band of passionate engineers and product folks who wanted to build them.

We reached out to our friends at Lucasfilm and Disney, and since then we’ve been working together on building google.com/starwars. It’s a place for fans, by fans, and starting today you can choose the light or the dark side, and then watch your favorite Google apps like Gmail, Google Maps, YouTube, Chrome and many more transform to reflect your path. And that’s just the beginning. We’ve got more coming between now and opening night—the Millennium Falcon in all its (virtual reality) glory included, so stay tuned. And we’ve hidden a few easter eggs, too. So awaken the Force within, and be on the lookout for things from a long time ago in a galaxy far, far away…

Awaken the Force within you and your Google apps will follow your path. #ChooseYourSide https://www.google.com/starwars

He was a cunning warrior. And he was a good duck.

YOU MUST SEE IT

Master Skywalker, there are too many of them. What