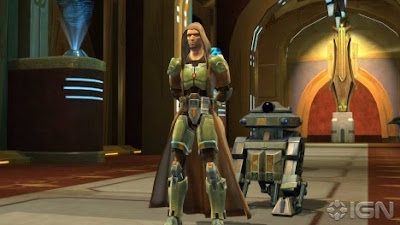 IGN has an intresting interview with James Ohlen about the companions in Star Wars: The Old Republic:

IGNPC: Companions have been part of BioWare games from Mincs to Liara. How has the role or design of companions evolved over the years? How will The Old Republic improve on the existing companion systems? What have you learned about players’ expectations for the companions?

James Ohlen: Companions have evolved a lot since the days of Minsc and Baldur’s Gate. In Baldur’s Gate the companion characters we created were limited to voice over barks and a little bit of story. In Baldur’s Gate 2 we expanded that significantly, adding the ability for players to get to know his companion through intricate conversation trees, companion centered quest lines and romances. Occasionally we wouldn’t have companions as part of our initial design (Neverwinter Nights and Jade Empire were examples of that), but we’d always add them back because companions had become such a staple of our games. In fact, Mass Effect 2 has a storyline that is focused primarily on the collection of companion characters.

With Star Wars: The Old Republic we had to solve for the fact that this is the first Bioware (MMO)RPG that is entirely real time. All of our previous RPGs allow the player to pause the game. We have had to approach how a player controls his companion much differently than before.