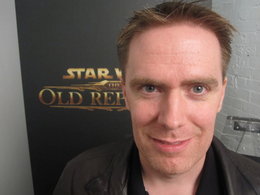 Ten Ton Hammer posts a really interesting interview with James Ohlen that’s worth the read if you have yet to see it. Reuben Waters of Ten Ton Hammer has the opportunity to sit down with Ohlen, creative director for Star Wars: The Old Republic, and ask him some questions about the game.

Highlights include companions, grouping with other players, banking and money systems, PVP and chat functions and the mail system as well as whether or not you can check your mail while on your ships. There’s a lot of great info in here, some of which I don’t remember ever hearing being covered in another interview or article to date, making it well worth the time to read it over.

Here’s a snippet I found interesting as I had been wondering about this myself:

Ten Ton Hammer: That brings up a very good point in terms of how things will work if I group with another player who opts to bring along the same companion character. Will there be some form of naming convention employed in those cases so you don’t have one companion named Vette in the group, and another named ‘Twi’lek Pirate #2002’ or even ‘Vette2’?

James: When you view them in the world, their name doesn’t show up. Instead it will be more like ‘James’ Companion’. We decided to do that because it’s less immersion breaking. That’s much better than having you both see Vette and thinking, “That’s kind of lame.” It’s amazing what kind of difference something as simple as a name can make though.

So instead it will be like, that’s Rich’s companion and she’s a red skinned Twi’lek, and mine is a blue skinned Twi’lek. That way I can totally get over the fact that I know he’s also playing a Sith Warrior, and that he’s also on the same story, and that he met the same character. We want to do enough hand-wavery to make it so that it’s not an issue for players.