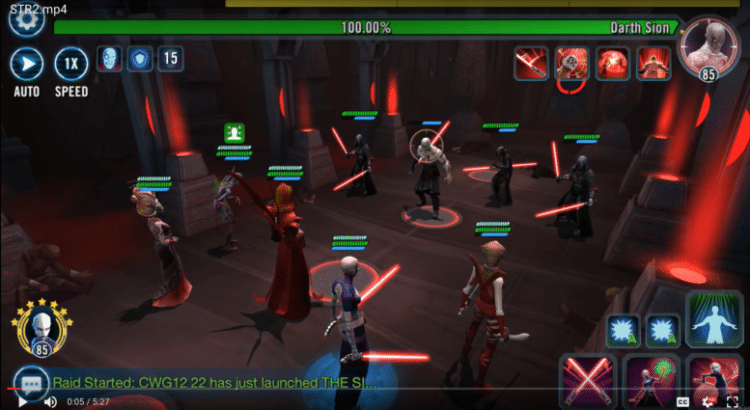 The team over at Star Wars: Galaxy of heroes are making some changes to the Sith Raid. All very good changes to the Sith and Tank raids. Actually, it seems like Tier 6 will end up getting best changes for players. Favorable changes on DN and Traya’s kits and mod salvage will be available in that tier. Not to mention reducing the health pools for all the bosses. I would be a little disappointed in that if not for the fact that I have a 7 star Traya now so the Sith raid isn’t quite as important to me, outside of the g12+ salvage, but that is going to be a grind to craft full pieces (as it should be).

Two weeks ago I mentioned that we were getting ready to reveal some changes coming to the Sith Raid based on extensive feedback collected from the players through the forums, Reddit, beta program, and other channels. Today, I’m pleased to be able to share the broad strokes of these changes with you and we’ll be providing more specifics as we get closer to the release.

One of the resounding points of feedback we have heard from the community is that the raid is still prohibitively difficult and not rewarding enough for players, particularly in Tiers 1-6. To top it off, on the upper end of those playthroughs, it’s taking upwards of a week for some guilds to complete, while many of the guilds who have been doing Heroic (Tier 7) for awhile are completing it a couple times a week. While we always want the top end rewards to be the greatest, because they should be commensurate of the effort it takes to play at that level, it has gotten particularly challenging as the “effort” required in the Sith Raid has been higher at the lower Tier levels.

The two areas we’ve heard repeated feedback on are: a) the randomness of some of the mechanics (thus forcing retries) and b) the balance of effort versus rewards. In order to address randomness and make the experience feel less frustrating while climbing the ranks to Heroic, we are removing some of the elements that really make it hard to judge what the AI will do next. For the rewards, we are making some improvements to the value but also focusing on decreasing the time (and frustration) it takes to get those prizes as we believe that will net in significantly more rewards over time.

Randomness
The random nature of Phases 1 and 3 can be very time consuming if you are trying to get the most out of your teams. Often times, it is likely better to restart when Darth Nihilus’ Annihilate comes off cooldown sooner or later than expected. Other times, Traya’s lightsabers’ buffs/debuffs randomize in way that can makes your run practically and strategically very difficult to plan around. All of these chances for something to go wrong, increases the time commitment and often encourages players to restart until they get the perfect run. This shouldn’t be the way that you play the raid.

We have a made a few changes to address the randomness in the Sith Raid. Note, while we are focusing primarily on Tiers 1-6, there is one change we are making to Tier 7 to reduce frustration for those players as well:

We think these changes should significantly reduce the feeling of needing to restart. On to rewards!

Rewards and Time
Another point of common feedback was that the STR wasn’t worth the time. The plan is to hit this problem from both sides: faster completions and improved rewards. Overall, we want to reduce the average time it takes to complete the STR in Tiers 1-6 and incentivize players to keep trying to reach the next tier. We have three changes that should speed things up for most teams.

Speeding things up helps the raid feel better but we also felt the rewards were still not enticing enough at this completion rate.

Beyond Tiers 1-6
To be clear, most of these changes are not impacting Heroic. We still want this to be hard goal to strive towards and we feel the difficulty of the mechanics in Heroic match the level of rewards. Tier 6 will be the challenging stepping stone to Heroic as it will retain the harder mechanics.

We wanted to get these changes out as soon as possible but we need to take our time testing internally and find the right combination of changes to alleviate some of the difficulty at lower tiers. We think the changes outlined above will relieve some of the pain points that diminish your excitement and enthusiasm to participate in the Sith Triumvirate Raid.

Thank you all again for your feedback and your patience with these changes.