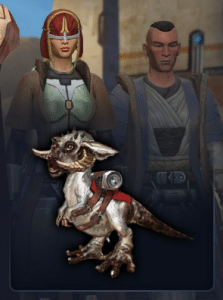 This was a discussion I was just having with some gamer friends the other day. BioWare is doing all of these awesome promotions for SWTOR like free play time for those who come back, pets and in game events like the Rakghoul Plague event and more. They are being very open with their Q&A sessions, trying to reveal future content so we all know what we want to hang on for and trying to hear the player concerns and make adjustments as necessary.

My friend says, “Yea, they know they are a sinking ship and they’re trying to stay afloat.”

At first I thought he was just bitter because he’s let down by the game but when I really thought about it and looked at the facts, it’s possible he was closer to the truth than I thought. PC Gamer says “BioWare doing “anything and everything” to keep players logging in to SW:TOR” and signs would point that they are in fact going to great lengths to keep players in the game.

But even if that is the case, we have to question if this really reflects poorly on the game. I mean, maybe it shows good marketing tactics. With so much invested into this game already, one can easily see why they would try even harder than other game developers to attract and keep players.

Some say that this is an indication that the game is not as good as some would think and that the bottom is about to fall out of this entire thing. Is that really true? Well, PC Gamer took some time to talk to BioWare’s Daniel Erickson about the future of the game and the challenges of responding to the community while sticking to the established content plan.

BioWare claim that subscriber numbers haven’t dropped, but concurrent users at peak times have. This, Erickson says, is the reason why players are noticing a lot of ‘light’ server populations – and also why mergers are on the cards, but not a priority. According to Erickson, they’re doing “anything and everything” to bring that concurrent users number up. “Nothing is off the table when it comes to making sure our communities are strong and active on each server.”

The demands of building a fully-voiced MMO means that new missions and planets have to be planned far in advance – but that doesn’t necessarily mean that BioWare can’t change tack if the community demands it. “We’re getting spryer all the time” Erickson explains “usually it’s a question of priority and since we have separate teams working on different initiatives we can usually change priorities for a particular game update fairly easily.”

BioWare has done well so far and continue to insist that their numbers are fine and that they have many great ideas for interesting content on the way to continue to keep players in the game. What do you think? Is it enough for you? Do you think they are scrambling or that they’re just practicing good marketing skills?