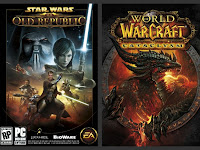 Just how many people are actually playing SWTOR? It’s obvious that the game is very popular but how do you put numbers on just how popular it is? GamesIndustry.biz has a story that tells us a little more about just how many users SWTOR boasts today, just weeks after the official launch.

One research firm says that SWTOR has 350,000 concurrent users. “”We view the early success of Star Wars as an indication of a healthy MMO market,” said Baird spokesman Colin Sebastian.

These users are said to be spread across 215 servers in America and Europe. This is nearly half the 491 servers in WoW. However, these numbers from the firm are different from what the BioWare doctors are reporting.

They had different numbers according to their blog post on the official forums. Ray Muzyka and Greg Zeschuk say:

“Yesterday was quite a day here in Austin. We likely had the largest one-day subscription account registration process in MMO history – over one million people are now registered players of the game, and the number is growing rapidly.”