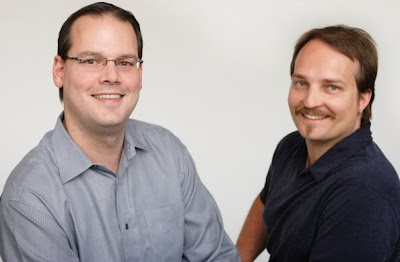 The Founders of Bio Ware, Dr. Ray Muzyka and Dr. Greg Zeschuk, are to be included in the AIAS Hall of Fame (The Academy of Interactive Arts and Sciences) which sounds like an awesome way to be praised. The two are worthy of this awesome achievement, for they accomplished so much in the past 14 years.  BioWare has shot out impressive game titles the equal the level of baddest @$$ RPG’s.  They will be presented the award on the 10th of February, 2010 in one of the brightest city in the world or possibly the Brightest, Las Vegas. This will be held at the D.I.C.E. Summit (Design, Innovate, Communicate, Entertain) which basically translates to a gathering of gamers, a Convention, or An Emmy for the truly gifted. While a gamer is earning Achievements on his or her Xbox 360 while Dr. Ray Muzyka and Dr. Greg Zeschuk and others like them continue to work their coding off creating true masterpieces.

“Conversely, Zeschuk is described as being interested in “gourmet food, music and fine beer (in no particular order of importance).” Both are also directors and co-chairmen at interface software company CodeBaby.”