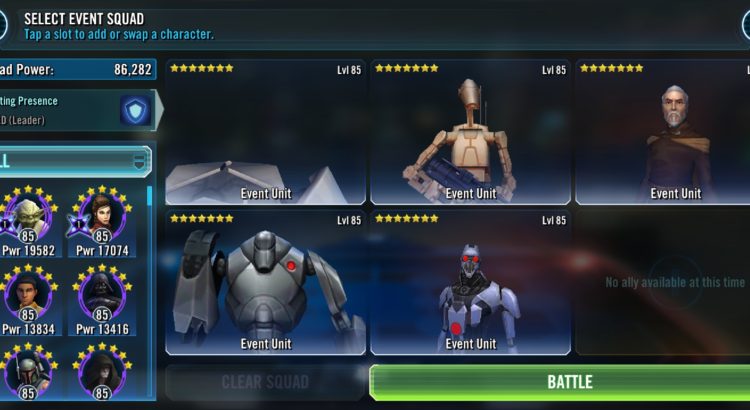 Capital games is fixing a newely found bug in Star Wars Galaxy of Heroes resulting in Droidekas dealing huge amounts of damage in Phase 3 of the Sith Triumvirate Raid . Here is the news:

We became aware last Friday that Droideka was dealing huge amounts of damage in Phase 3 of the Sith Triumvirate Raid and said we would follow up this week when we have time to fully investigate.

It appears that when a unit uses Stand Alone, instead of setting allies’ speed to 0, Traya is actually setting it to something closer to -900,000. This means when a Separatist ally uses Stand Alone while Droideka has Damage Immunity, it has a 35% Chance to assist, and will deal a ton of damage as Droideka’s Attack Damage is based on the difference in speed. Droideka is also assisting before the debuff that prevents assists as the assist activates the moment a Separatist ally uses an ability.

Why -900,000 speed? Well here’s a bit of back story from the developers: When we initially created Stand Alone we wanted to future proof the effect against any possible speed increases so characters couldn’t accidentally gain turn meter. At the time, we decided subtracting 900,000 from a unit’s speed should be more than enough to stop a unit even if they had a crazy amount of speed, buffs, mods or some new feature we hadn’t devised yet.

To be clear, this is an unintended interaction and the plan is to change Droideka to no longer account for speeds under 0. Traya in the Sith Raid will remain unchanged but Droideka will no longer be dealing incredibly high damage in this circumstance. This should minimize the impact to both characters and allow Droideka to keep his unique way of dealing damage.

We will let you know exact details as we get closer to launching this fix. The current plan is to add it to the next release but this is subject to change based on testing and any new issues we encounter.