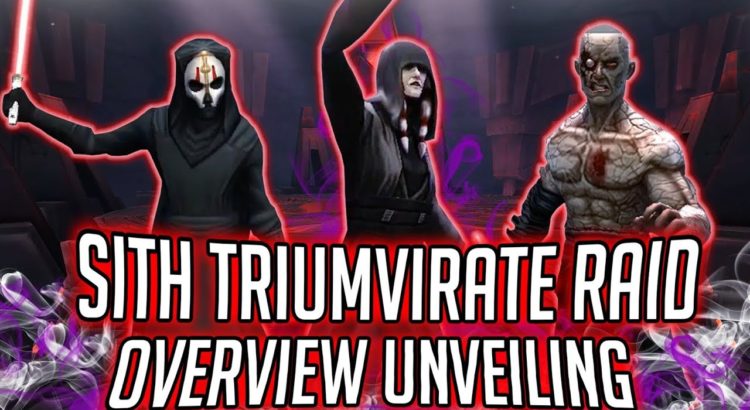 Here is the latest Star Wars Galaxy of Heroes Dev Blog. In this one  they are talking about  one of the hottest topics in the community lately, changes to the Sith Raid Rewards.

The devs are implementing the rewards on the Sith Raid first in our upcoming hotfix update (slated for next week), and will make similar changes to The Pit and AAT in the coming months. We waited until now to make changes because we looked at the data that shows how the first few runs of the raid netted out across many different segments of the player base, then we created tuning that will work for guilds at various levels and factors in the new cadence of the Sith Raid alongside The Pit and AAT.
Given the difficulty of the raid, we will be increasing the rewards a bit. Skip down to the meat of the post for this info, along with a Q&A based on expected questions we think you may have. The credit for all of this information goes to our data & analytics specialists who are too shy to introduce themselves in the forums…for now.
Also, we’ll be adding it to the calendar, but in the spirit of the Character Cadence post that Live Producer Nick posted on Friday, we will be adding Mythic Thrawn to the return of the Thrawn event, which will occur mid-next week (currently slotted for 4/11, but any number of factors mean it could end up +/- 1-2 days).
As for our communication moving forward, we will work to settle into a regular cadence. I’d like to say weekly, but I don’t want to promise that and then not meet expectations. So for now, I’ll say that it is my hope to do it weekly, but depending on how much information there is to share, we may do it biweekly (using the every two weeks definition, not the twice a week one :P). Also, did I mention we are hiring a Community Manager? We are working on some longer-term communications that include a number of things that have cropped up recently, from forum concerns to player-suggested QOL features, to communicating our drop rates. The latter will probably take the longest as there are numerous points of approval, but they will be coming.
Finally, we have a couple more intended announcements this week, including the Road Ahead blog, which is going through the final phases of approvals and that I plan to release in the next couple of days. We are also working on setting up numerous Q&A videos with Game Changers as Player Lifecycle Producer Erik mentioned in the Community post, and they will ask questions asked by you guys in the previous Q&A. We are also doing a follow up Live Q&A on our forums this Friday, April 6th at 12PM PDT. That’s it for this week.
And again, thank you so much for your dedication to Star Wars: Galaxy of Heroes. We will do our best to be worthy of it.
Thank you, and I’ll see you on the holotables,
-Carrie
P.S. Today’s in-game reward will be coming a little later today and will be available for people to grab inside of the next five days. It will be granted directly to the inbox so as to ensure nobody will miss it.

Sith Raid Reward Changes
Raid Rewards are an important part of the overall game experience, especially given the time, effort, and coordination it takes for guilds to be successful at them. With the Sith Raid we also endeavored to reintroduce lower tiers of the Sith Raid so that there are more options for people of all player types to experience this new content. The rewards are intended to be commensurate with the effort, and we have made a number of changes to increase the overall rewards, as well as reduce certain aspects of frustration (challenge gear in higher tiers). We will continue to monitor the experience, both quantitatively and qualitatively.
After monitoring how guilds are progressing through the challenging Sith Triumvirate Raid, we’ve significantly revamped the rewards across all Raid tiers. After monitoring early results & player feedback, we will do a similar pass on AAT & Pit Raid rewards in the coming weeks. Below is an outline of the adjustments we’re making, and you will see them in our next content update, which is intended to launch inside of the next two weeks.

Across all Sith Raid Tiers, and especially beginning in Tier 4, the underlying contents of the Sith Raid mystery boxes have been revamped.

Q&A
Here are some questions we are expecting you may have along with their answers. We’ll be monitoring the megathread for this post (linked below) and will add additional relevant questions if needed.
Q: Is the overall increase in rewards meaningful?
A: Yes. We’ve intentionally scaled both quantity and quality as players move up the non-Heroic tiers, to fit gear rewards more closely with what players need. The intent is for these guilds to be able to complete a non-Heroic Raid tier more than once, but less than twice, per week. Guilds who fall within this range should receive, over the long run, an appropriate quantity AND quality of gear rewards to enable them to get powerful enough to grow together – a change from where raid rewards currently are, where players are essentially forced to push harder outside of the raid and other guild activities, in order to execute at the highest level within the raid.
Q: Will players be happy with the normalization of gear Mystery Boxes?
A: We think so. At higher tiers, the Sith Triumvirate Raid is challenging enough to require a contribution from every member of a guild, and so democratizing some of the rewards should be healthier for guilds in the long run. Feedback from similarly flat Territory Battle gear rewards has been positive enough for us to feel confident that this is the right change.
Q: Why haven’t you removed all challenge gear from all tiers?
A: Guilds currently completing Tier 3 & below are considerably more diverse, small, and difficult to balance rewards for. Nearly all of the pieces rewarded in early tiers are in demand for players in guilds who are currently completing Tier 3, but unable to graduate to Tier 4 anytime soon. That said, the raid is still relatively new, and if it settles in a place where even those players are clearly not being adequately rewarded, we will revisit those earlier tiers.
Q: Can I still get Carbantis/Stun Cuffs/[insert gear here]?
A: The main benefit of reallocating some rewards from the mystery box to the guild currency / Guild Event Token payout is to provide players with agency around what gear they need. Some extremely high-demand challenge gear remains in the pool of potential rewards for a fully crafted piece, but ALL challenge gear has been removed from the guaranteed salvage rewards, in favor of some of the toughest, highest-level gear salvage (including raid-exclusive gear salvage) in the game. Overall, the vast majority of players will have increased access to difficult “raid gear” AND “challenge gear”, whether through the mystery box or through the increased Guild Currency payout. And after we monitor the initial results, if we find that difficult gear inflow has been hampered by this change, we will primarily use changes to the Guild Currency & Guild Event Token store selection to increase availability of that gear.
Q: By placing Top 3, I helped lead my guild to a Heroic victory and Darth Traya shards. Why aren’t I being more rewarded for my top position?
A: Heroic raid rewards represent some of the most epic rewards in the endgame, and top performers will be handsomely rewarded across all categories. Some top ranks are now rewarded nearly double the guild & Guild Event Token currency. Future releases, and the unusually strong utility of raid characters (like Han Solo, General Kenobi, and Darth Traya), will continue to reinforce that high-ranking players will still be rewarded for their standout performance.