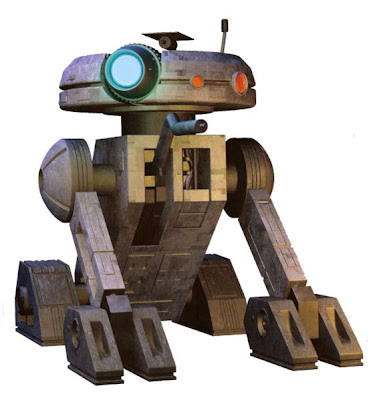 T3-M4 (also called Teethree for short) was a T3-series utility droid built as a master slicer for crime lord Davik Kang. His life of crime was short-lived, however, after Taris was bombarded by the Sith and Davik was killed. He then accompanied Revan on his search for the Star Forge.

Sometime after defeating Darth Malak, Revan left for the Unknown Regions, leaving T3-M4 with the Ebon Hawk. The droid then used the ship to rescue the Jedi Exile from Darth Sion, and aided her in her quest to stop the Sith Triumvirate.

Travels with Revan
T3-M4 was a late-prototype model of the T3-series utility droid, built on Taris by Janice Nall for the local crime lord Davik Kang in 3,956 BBY. The droid was top-of-the-range for its time, and featured exceptional code-breaking and computer slicing skills, in addition to being able to mount armor and weapon upgrades. T3-M4’s original purpose was to aid Canderous Ordo in breaking into a Sith military base on Taris for Davik Kang. Revan, under the advice of Canderous, assisted in stealing the launch codes from the base and the motley group managed to escape the planet without being vaporized by the Sith blockade.

When the Ebon Hawk, Davik’s most appreciated light freighter, came into Revan‘s possession, T3 accompanied its crew for the rest of their journey, eventually being taken by Revan to the borders of the Unknown Regions. Before this, however, T3 was given special instructions by Bastila Shan, another of Revan’s companions. Under this programming, if T3 lost contact with Revan, he would return to Republic space and contact her.

Travels with the Jedi Exile
Following these instructions, T3-M4 resurfaced five years after the end of the Jedi Civil War when the Ebon Hawk returned to known space. Unable to find Bastila, he instead sought to find the Jedi Exile because of her history with Revan. Onboard the heavily damaged Ebon Hawk, T3-M4 found the droid 3C-FD, and both were instrumental in repairing and getting the ship to the Peragus mining facility while all the other crew members were incapacitated.

When the Exile awakened in the medical bay of the mining facility, T3-M4 helped her gain access to the Peragus fuel depot before being found and disabled by the HK-50 droid and dumped in a fuel line, only to be discovered by the Exile and Atton Rand as they made their escape from the facility.

After the Jedi Exile and the others escaped from the Peragus system on the Ebon Hawk, they were forced to refuge to Telos IV, where they were detained at Citadel Station. Atris had the impounded Ebon Hawk stolen from Citadel Station and moved to her Jedi academy in the polar region of Telos. T3-M4 was detained with the ship, and was thus also taken by Atris. At Atris’s academy, his memory banks were downloaded by Atris’s Handmaidens. The link between the academy’s computer and T3-M4 worked both ways, however, and the droid was able to download a holorecording of the Exile’s trial before the Jedi Council and a list of the locations of the remaining Jedi Masters.

When the Exile was captured on Nar Shaddaa by Exchange thugs in the employ of Goto, T3-M4 once again came to the rescue. With the aid of The Champ, a Chadra-Fan Pazaak player, the droid was “sold” to Vogga the Hutt and sent to work in his shipping warehouse. Goto had been intercepting all of Vogga’s shipping by following his transports transponder codes. The freighters would be captured by Goto’s droid yacht, which was cloaked in orbit. To find and infiltrate the yacht, T3-M4 stole the transponder codes for one of Vogga’s freighters and fought his way out of the warehouse when three HK-50 assassin droids tried to stop him. The Ebon Hawk’s codes were then changed to match the freighter, and Goto’s yacht intercepted the ship as planned, allowing for the rescue of the Exile and the destruction of the cloaked yacht. During the Exile’s journeys, T3-M4 was responsible for the Ebon Hawk’s navigation, as he alone could access the navigation records of the ship due to a voice-printed lockout. Presumably, they had been locked by Revan to hide his destination. Eventually, after the destruction of Malachor V—Revan’s last known location—along with its Sith academy, the droid fulfilled his final mission by guiding the Ebon Hawk into the Unknown Regions. The Exile and T3-M4 left explored space together.

T3-M4 had many abilities and was fully deserving of the moniker of ‘utility droid”. Having never had a memory wipe, he developed a personality and quirks. There is evidence that he was even resistant to memory wipes: if another droid attempted to erase T3-M4’s memory, T3 could replicate the other droid’s numeric matrices, slice into its system, and short-circuit that droid instead.

T3-M4 could make security and computer spikes and could turn himself into a makeshift workbench which the Jedi Exile used to upgrade or take apart objects in the field. He utilized weapons, such as blasters and disruptors, as well as one of many types of flame-throwers, scramblers, and shock arms. He could be easily fitted with many types of droid armor and other miscellaneous upgrades. The droid was also a master of computer and security slicing.