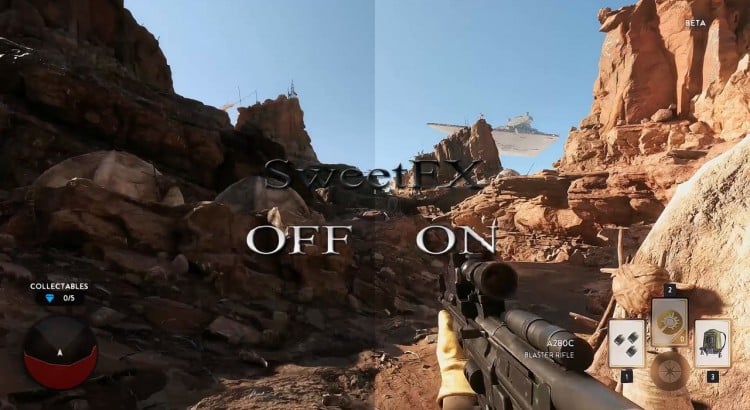 Star Wars: Battlefront was always going to be extremely keen on visuals. DICE have made it clear from the beginning that they were going to go for authenticity and that they were going to exploit the Frostbite engine to the fullest in their quest for Star Wars eye candy. Granted, on maximum graphics settings, the game has always been a visual delight, but there are individuals out there who have found ways to push it way past what the official version was supposed to accomplish in this respect. Back in November, a mod surfaced, which was used to produce a few impressive screenshots. Called SweetFX Real Life, the mod makes it possible for the game to run in 4k at 60fps, putting out some truly mind-boggling graphics details. Following the still pictures mentioned above, the mod has now been used to make actual footage too, posted to YouTube by jackfrags.

The footage consists of action shots of various game modes on Endor, Tatooine and Hoth, mostly battle-scenes pitting the rebels against the empire’s storm troopers and their hardware, and it has a pleasant and rather catchy musical score attached for added effect. Indeed, the resulting eye-candy is impressive in every way, and the fist-bump Darth Vader receives in the end from one of his scout-troopers is the cherry on the proverbial cake.

The creator of the SweetFX Real Life mod is Martin Bergman, an ex-developer who had apparently worked at Activision in the past.

Despite the success of the mod, most of the game’s fans/players continue to decry the lack of depth of the actual game-play, with several commentators sarcastically mentioning that all that’s needed now is a “here’s the rest of the game” mod, to make Battlefront the game it was truly expected to be by the community.