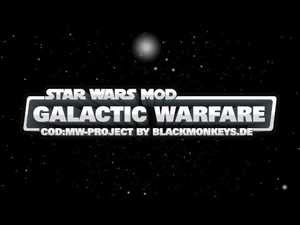 Are you a Star Wars fan who’s into Call of Duty? This might be some of the coolest news you have ever read. German modding outfit, Black Monkeys have created an awesome Star Wars-themed mod for Call of Duty: Modern Warfare.

After 2 ½ years of development, the team is now ready to bring you Galactic Warfare a Star Wars-themed ‘mod’ for Call of Duty: Modern warfare. In fact, this is as good a reason as any to give Call of Duty a try if you have previously been on the fence about playing it.

This awesome mod is a total conversion of all the environments, weapons and even the characters. It’s all re-skinned to fit the theme and story of the Star Wars universe. You can choose the Imperial Forces and become a trooper or be a solider of the Rebel Alliance. There are seven great maps to deathmatch over but you’re going to need the PC version of CoD: Modern Warfare (if you already own the game, you can just download it).
Check it out yourself in this video trailer: