The Gran were a sentient species native to the planet Kinyen, though they had colonies across the galaxy, including settlements on the planets Hok and Malastare.

Physiology
They could easily be identified by their three eyes and their goat-like snout. Female Gran had three breasts. The Gran had excellent vision, able to resolve more colors than most species, and even able to see into the infrared. Gran had two stomachs, having evolved from herbivorous grazing animals who lived in herds on the mountains and highlands of Kinyen. Gran were also able to sense one another’s emotions and disposition by noting subtle changes in body heat and skin color. 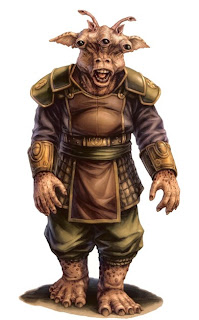 Society
The peaceful nature of Gran society was a reflection of their homeworld, Kinyen. Kinyen boasted large and rolling grasslands, a dense and beautiful forest, and one of the longest and clearest rivers in the Sumitra Sector. The beauty of this planet, which was almost devoid of natural predators, helped the Gran develop strong bonds of home and family in their race. Grans also mated for life, and as such it was rare for any Gran to leave his or her planet of origin once they had taken a mate.

The Grans were also very protective of their families, and made some of the best parents in the galaxy. This was because of their very powerful and sensitive sight, which could sense the emotions of their mates and their children. Gran society maintained its balance by setting up strict career quotas, and making sure young Gran were educated for a specific job that best serves his or her talents. While other species who valued free will criticized such a rigid social system, to the Gran it was both logical and essential. Gran religion revolved around the worship of the goddess Doellin.

Gran had a strong need for companionship – a Gran left alone for too long would go insane or die of loneliness. Generally, they needed other Gran for companionship, but some Gran were able to form sufficiently strong bonds with aliens. The most feared punishment among the Gran was exile. Lone, outcast Gran, often wearing black to avoid painful memories of the colorful cities of their homeworld, were generally given a wide berth by experienced spacers. 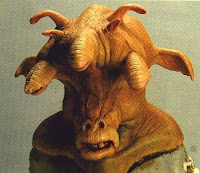 With such close bonds formed throughout the Gran community, it was unsurprising that they concentrated their cities into very small areas, so they were never out of touch with their many relatives. These cities, while hosting a majority of the population of Kinyen, also hosted the small government of the Gran. The government was a lose group of delegates from the major Gran families who usually controlled different aspects of Gran society. One delegate was selected randomly every three and a half standard years to be the leader of this group. It was only due to the very peaceful sensibilities of the Gran race that this system worked at all.

Indeed, in most of recorded history there had never been a major conflict between Grans.

Gran were often unreliable, easily bribed and easily addicted to drugs and liquors though they were shrewd and often under-estimated.

History
The Gran on Kinyen had maintained a peaceful civilization for over ten millennia before the fall of the Old Republic. During an expansionistic period circa 1,000 BBY, colonies were established on Hok and Malastare. However, the emigrating colonists left a significant imbalance in Gran society on Kinyen.

Feeling they were destroying too many families, and diluting the Gran race, the government reacted with isolationist policies and prohibited unauthorized emigration from Kinyen and limited offworlders to special alien quarters in their cities. This protected the Gran society, but it also isolated the Gran on Hok and Malastare who had begun to form strong bonds to their new homes. The Gran colonies continued independently, continuing the strong social bonds of Gran society but with loosened social codes. The looser social codes allowed for more corruption in the upper levels of colonial Gran society. 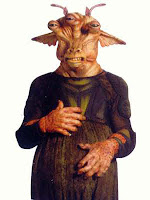 One of the most infamous examples was the Gran Protectorate of Malastare, which subjugated the native Dugs population, treating them as little more than slaves and even relocating them to the western continent of their own planet. The behavior of Malastare’s Gran was unusual, as most Gran on Kinyen were peaceful, calm beings who abhorred violence, and preferred peaceful ways to adapt to difficult situations. The high corruption rate, as well as the brutality towards the Dugs, led some Gran on Kinyen to conclude that the Gran of Malastare were no longer real Gran.Grans typically placed the betterment of society above self-interest, and were keenly aware of their role in the bigger picture.

The Gran of Malastare had a great deal of power within the Galactic Senate during the later years of the Old Republic, represented by the corrupt Aks Moe and his successor, the influential Loyalist Committee member Ask Aak. Hok also produced a well-known Gran in that era, the podracer Mawhonic.