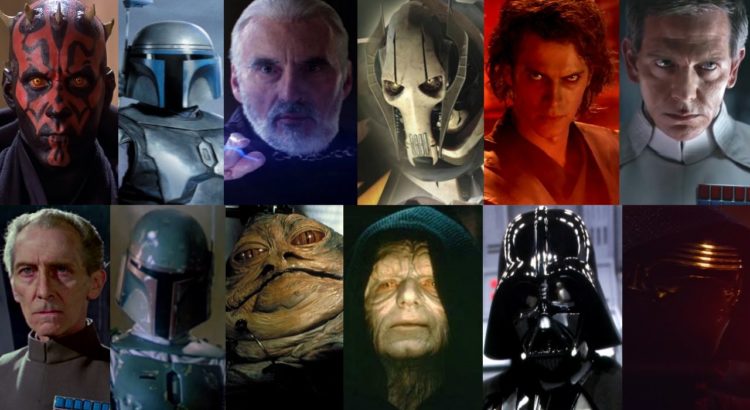 From the original trilogy to the recently concluded sequels, the Star Wars franchise is filled with memorable villains.

Adorned by brutally minimalist outfits and armour, the bad guys enter with flair (often in a ship that’s flashier than a GClub game).

Not all the Star Wars villains are created equal, though. Some are more sinister than others, so to celebrate the gloriousness that is the Star Wars universe, we’ve compiled the Top 10 rogue’s gallery of villains in the franchise.

While they may not be the strongest or most accurate soldiers, stormtroopers are the most ubiquitous antagonists in the galaxy. Whether it’s combing the desert for our heroes or speeding through a dense jungle planet, they’re there to take a beating and make the heroes look good.

While he may only have seconds of screen time, Greedo played a big part in making Han Solo one of the most revered characters in the franchise. The Rodian bounty hunter was also involved in one of the most controversial edits in the Star Wars canon when he shot and missed Han at point-blank range.

One of a few villains in Star Wars who are more motivated by money than ideology, Jabba the Hutt is arguably the sleaziest crime boss in the galaxy. Despite having the appearance and mobility of a soggy croissant, Jabba ran a ruthless criminal organization and gave our intrepid heroes a run for their money.

Kylo may have earned the reputation as the angsty teen of the franchise, but his raw talent still makes him a terrifying foe. Like his idol, Darth Vader, Kylo retains a bit of good within him, crucial in the closing acts of the series.

As commander of the first Death Star, Wilhuff Tarkin made up for his lack of Force powers and fancy weapons with utter ruthlessness. Even with Darth Vader behind him, Moff made it clear that he was the most formidable person in the room with a cold, calculating demeanour.

Behind Dooku’s frail appearance and air of nobility lies a skilled duellist and master tactician. It’s no surprise that he single-handedly defeated Obi-Wan and Anakin Skywalker –the most powerful Jedi in the universe–in lightsaber combat.

Another short-lived role was the bounty hunter Boba Fett, one of the most iconic Star Wars characters. Whether it’s his armour or assortment of gadgets, he certainly isn’t one to miss.

While Star Wars fans remain divided on the Phantom Menace, they do agree that Darth Maul was the best villain in the prequels. From his devilish appearance to the dual-blade lightsaber that caught viewers off-guard, Maul cleaved his way into Star Wars pantheon.

Also known as Sheev Palpatine, the Chancellor, Darth Sidious, or that creepy old guy who shoots lightning from his hands, Palpatine is a villain Star Wars fans love to hate. Unlike others who shoot and slash their way into battle, Palpatine works surreptitiously behind the curtain, scheming from a mild-mannered bureaucrat to the most powerful man in the galaxy.

No self-respecting list ranking Star Wars villains would be complete without Darth Vader at the top. A cold, booming voice, flowing black cape, red lightsaber, and terrifyingly blunt lines make Darth Vader a memorable character. He may only be the second most powerful Sith Lord of all time, but he’ll always be number one in our hearts.