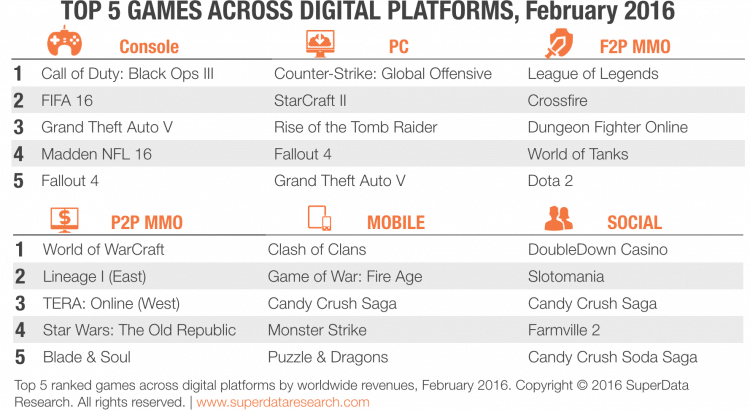 SWTOR is the second largest US based MMO. It was the 4th most top grossing pay-to-play MMO by revenue in February of this year. While there may be haters claiming the game has failed, or that it’s no longer relevant, the stats just don’t support this. Star Wars: The old Republic is doing well and is considered a huge success. With the release of the newest Star Wars movies, we can probably expect the game to continue to grow.

Superdata research shows the top grossing games on a variety of platforms. Here we see the stats ranking SWTOR 4th in its category.

You can tell that to the haters saying the game is dying.

Now, despite what these numbers and stats show, there are still players who complain about the game’s lack of content. Or at least, their perceived view of lack of content. We’re written a few times just recently about Bioware creating more new content for Star Wars: The old Republic. So maybe it’s just not the type of content certain naysayers want. What we do know is that if the game continues to succeed and turn a profit, they’re going to continue to invest in it. That’s just smart business. And when it turns up in the top 5 of a highest-grossing games list, you can bet they’re going to keep doing everything they can to keep it at the top.