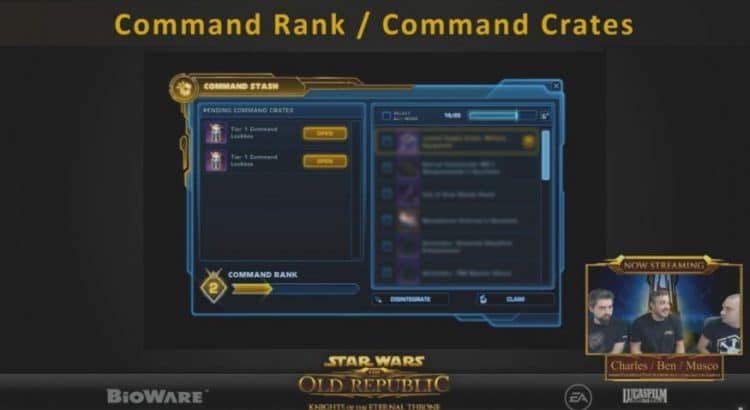 Are you sick and tired of the game of chance lottery that is the Galactic Command system? You won’t be alone in this thinking because many fans of the game have spoken out about how this system frustrates them. While we know it’s not likely they are going to change it at all, our pal Xam Xam from Xam Xam Says has an idea about how they could compromise. While we don’t expect them to do it, it can be fun to talk about the possibilities and who knows? Maybe Bioware is listening and will decide to give it a try!

You can read the full post here but here’s the basic idea from Xam Xam:

“If SWTOR brought back Commendation/Crystal vendors into the game but kept the Galactic Command system as it is, would that be acceptable? Reduce how many Commendations we earn a little but still have them as a method of gearing with the RNG Command Rank system as a ‘bonus’. Having the Commendation Vendors back would also mean Preferred players would be able to get gear and participate fully in PvP.”

Now this is only going to cover the PvP gearing concerns and not PvE, which he says in the post, but it’s a start. He continues to explain:

“For PvE, I think that raid bosses should have a chance to drop gear as well as give a small amount of Crystals. This way, again, preferred players could still earn gear albeit a little slower.

I recognise that these are very ‘middle ground’ solutions and not ideal but, I feel they could be the most easily implemented by SWTOR to make the ‘grind of chance lottery’ not as bad.”

His idea would keep the gearing component out of Galactic Command entirely and have it used as a tool for getting bonuses and queuing. He also suggests it is kept a subscriber-only feature. Head over and read the full post if you want to learn more but all in all, it’s not a bad suggestion. What do you think about it? Are there other compromises you would propose instead? How would you like to see the gearing system improved in SWTOR?