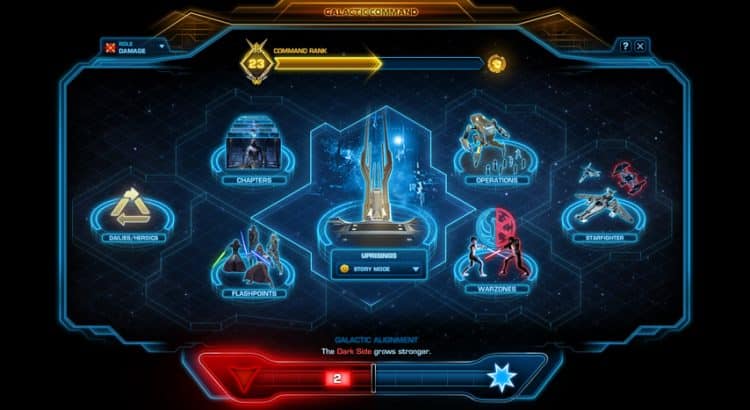 The guys at Bioware Austin published a new blog post a few days ago regarding the Dark vs Light system of the Galactic Command feature coming with game update 5.0 in Star Wars: The old Republic. Check it out:

An exciting new feature of Knights of the Eternal Throne is the Galactic Command system which gives you the ability to impact the balance of the Force™ in the ongoing dark vs. light war. Starting from your first moments in the game, you’ll be able to choose whether to fight for the dark or light side of the Force™. If you change your allegiance, it’s no problem – changing sides can be done at any time. Plus, all of your actions, including killing enemies, completing Missions, and making choices throughout your story will determine your character’s alignment. Everything you do as part of your gameplay ultimately strengthens your impact on the dark vs. light side war by igniting explosive and unexpected dark and light side battles on your server. Let’s talk about how it all works!

As you earn points they get added to your server’s total dark or light side points, shifting the balance of the ongoing battle to one side or the other. To tell which way the battle is leaning, check the Galactic Command window (pressing CTRL_G) and view the dark vs. light meter at the bottom, as shown here: 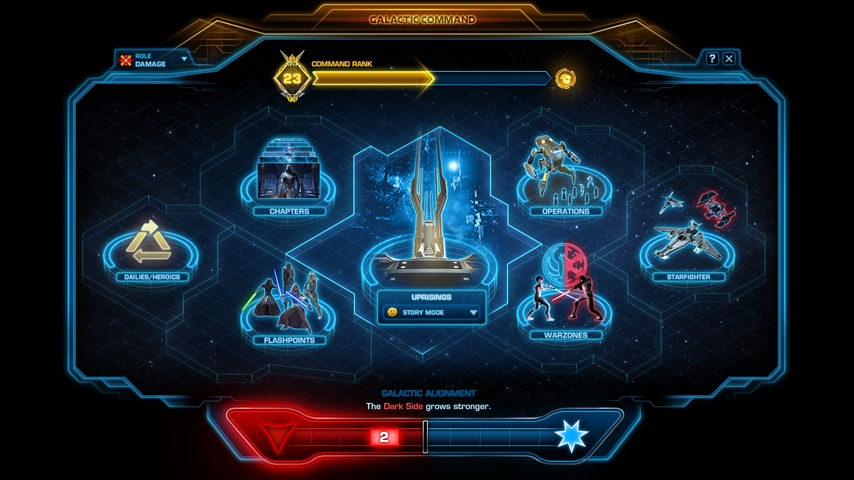 As one side moves closer to winning, you will see the changes reflected in the movement of the meter as one side’s color dominates the slider bar. As you can see, there are 5 “breakpoints” on each side, each representing a “level.” For example, if the light side is currently in the lead and their indicator looks like the following screenshot, then they would currently be at Light 3.

Your character’s alignment directly impacts the progress of the dark vs. light battle on your server. Let’s talk about how what you do impacts which side wins the battle!

The Dark vs. Light Battle
As one side secures victory, the galaxy will begin to see the effects. For example, let’s say the dark side wins on your server and you are in Dark 5. Suddenly, you may begin to see dark side enemies emerging and attacking, such as a Sith Lord ready to strike against the Jedi Temple on Coruscant . Light side players can try to fend off the attack by rallying together to try to take down this new dark side threat which has emerged. Doing so may even earn them bonus command points or light side tokens to that can be used to purchase items from an exclusive light side vendor.

If your character’s alignment matches the alignment of the side winning on your server, you will earn a dark or light side token in addition to your normal Command Crate each time you gain a Command Rank. As an example, if your server is at Light 3 and you have a Light side character, you will earn a light side token each time you gain a Command Rank. If your character is dark side, you will only gain the normal Command Crate. So, as the dark vs. light side war is waged, your efforts will help your side to win the war on your server and you will get rewarded for your efforts!

Spoils of War
In order to win the battle, your server must reach “Dark 5” or “Light 5.” The side that reaches level 5 first is declared the winner of the battle! If your character’s alignment matches the winning side (your character is dark side and the dark side achieved “Dark 5”) you reap the following benefits:

If your character’s alignment matches the losing side, don’t worry you get something as well (e.g., your character is light side, and the light side lost the war). You will receive the following benefits:

As one side earns victory, the server enters a “victory state” for a period of time and then the battle resets. It is our goal that victories will happen multiple times every day, so be sure to check-in often! During this “victory state ,” the losing side receives a short-term advantage, as all of their alignment point gains will be increased during that time ! Whether you are playing alone or you band together with friends and Guild mates to fight the dark vs. light battle, Galactic Command adds a new level of dark vs. light competition to your gameplay as you continue to fight for your side… for rewards and glory!